HONOLULU – The Liberty Flames found a way to outlast a short-handed UNI Panther men’s basketball team in the first round of the Hawaiian Airlines Diamond Head Classic, 76-74.

Freshman Tytan Anderson got his first start as a Panther in the absence of Trae Berhow. Berhow and assistant coach Seth Tuttle stayed back in Iowa due to a non-COVID-related illness.

Liberty scored off a free throw to lead early, but Tywhon Pickford picked up two three-pointers, and Noah Carter went on a scoring spree to give the Panthers as much as an 11-point lead before Liberty responded with 12 unanswered points to take the lead with 8:49 left in the first half. In the final three minutes of the first half, Liberty surged ahead on a six-point run. Panthers trailed 39-31 headed into halftime.

AJ Green opened the second-half scoring, and Nate Heise chipped in another two off a fast break. However, Liberty continued to lead the second half and pulled away by as much as 11 before AJ Green sparked the offense with a jumper. Bowen Born followed it up with layup off a fast break to put the Panthers within seven points.

Liberty continued to respond, keeping the Panthers down by 10 until the three-minute mark. Green and Austin Phyfe put up back-to-back buckets, but Liberty’s Darius McGhee stopped the mini run. Carter, Phyfe and Green combined for another six points, with four from the free throw line from Phyfe and Green, to put UNI within three with just 13 seconds left. However, Liberty found a way to outlast UNI and advance in the tournament to win, 76-74.

Today’s game between the Panthers and Flames marked the first ever meeting between the two programs. UNI is now 3-2 all-time against ASUN opponents.

UNI will play Wyoming or Stanford 5:30 p.m. CT Dec. 23, before wrapping up action in the final game on Christmas Day against an opponent to be determined.

This is UNI’s second appearance in the Diamond Head Classic after finishing in sixth place in 2015. A Missouri Valley Conference team has played in seven of the 12 tournaments held, with a pair of MVC schools finishing as runners-up (Wichita State, 2014 and Indiana State, 2018).

Today’s game against Liberty marked Ben Jacobson’s 500th game as the head coach of the UNI men’s basketball program. In his 16th season, Jacobson has totaled a record of 305-195 (.610).

With 20 points on the day, Noah Carter is the 110th Panther to have scored 500 or more in his career. Carter now has 509 career points.

All eight Panthers who played contributed to scoring.

Panthers scored 11 points off second-chance opportunities and had 34 points from bench players. 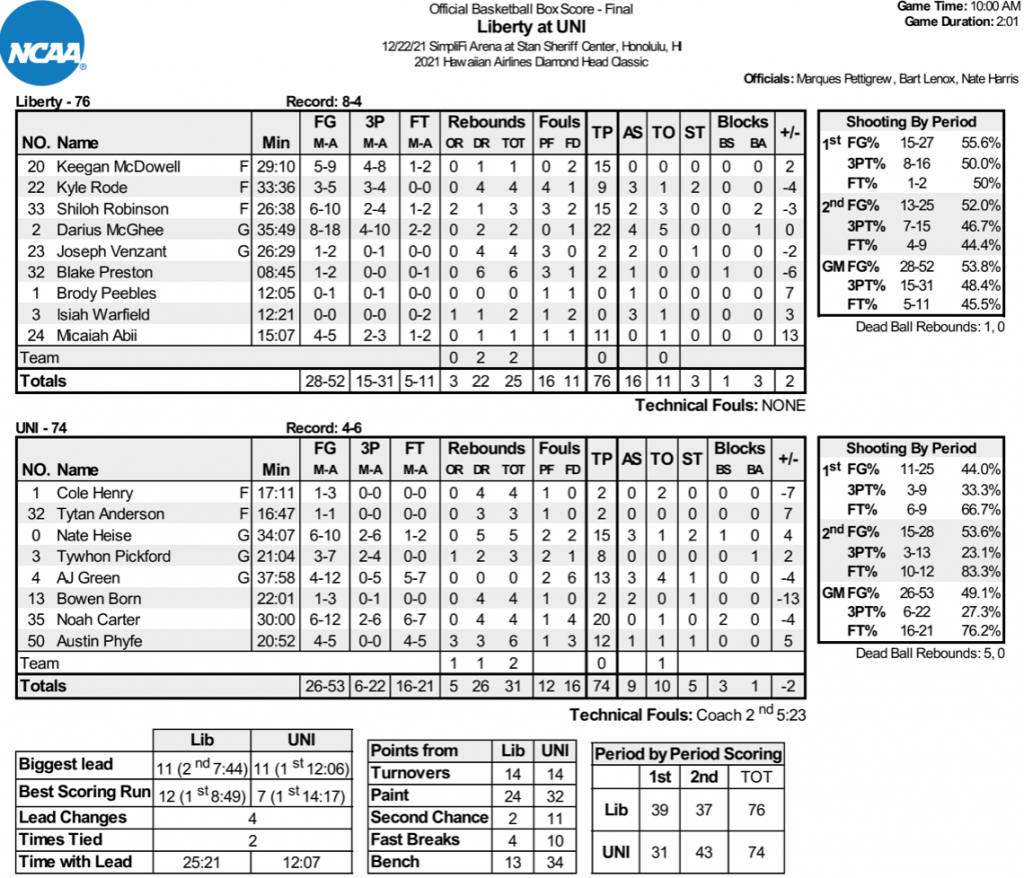