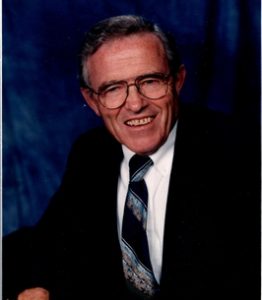 Melvin graduated from Estherville High School before working for Wilson, and then as a self-employed hog buyer in Kansas City, MO for 30 years, retiring in 1990. After Darlene’s passing in 1996, Melvin married Mary Lou Thompson in 1997. He moved to Graettinger in 2002.

Melvin married Darlene Thompson in 1950, to this marriage three children were born, Sharon, Barbara, and Scott.

He was a member of Bethel Lutheran Church in Graettinger, and enjoyed fishing, camping, boating, yard work and wintering in Texas.

He was preceded in death by his parents, wives, Darlene and Mary Lou, a daughter, Sharon (Dave) Cobb, his sisters, Shirley Poyzer and Alice Bradeen and a sister-in-law, Phyllis Book.