This news story was published on October 30, 2020.
Advertise on NIT • Subscribe to NIT

At approximately 11:53 PM Wednesday night, the Webster County Telecommunications Center received a 911 hang up call from the Casey’s General Store located at 2007 North 15th Street in Fort Dodge. Dispatchers attempted to call the store back with no answer. At that point, officers with the Fort Dodge Police Department were dispatched to Casey’s to check on the 911 hang up call.

When officers arrived, they discovered that a robbery had just occurred. Information gathered at the time indicated that a male entered the store, displayed a handgun to the clerk, and demanded money. After receiving an undisclosed amount of cash, the male fled the store and law enforcement was contacted. The suspect description we have at this time is a male dressed in dark clothing. No injuries were reported in this incident.

Officers and investigators with the Fort Dodge Police Department continued their investigation into this incident throughout the day. Information was developed early on of a possible suspect. During the course of the robbery, a witness observed the male suspect exit the store and get into a vehicle parked nearby.

As officers were investigating the incident Thursday morning, they observed the suspect vehicle in traffic on North 15th Street near Oakland Cemetery. Officers were able to catch up to the vehicle and conducted a traffic stop at The Station Convenience Store located at 2320 North 15th Street, just north of the Casey’s store where the robbery occurred the previous night. Thursday afternoon, a search warrant was executed on a residence in Fort Dodge, where two firearms were located along with other evidence. Based on information gathered to this point in the investigation, 23‐year‐old Fort Dodge resident Aries N. McGee, has been arrested and charged with the following:

McGee is scheduled to make his initial appearance in Webster County Magistrate Court. It was determined that McGee made out with less than $300 during this incident. 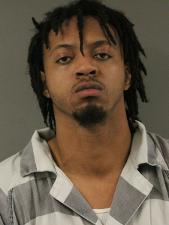