This news story was published on October 20, 2020.
Advertise on NIT • Subscribe to NIT 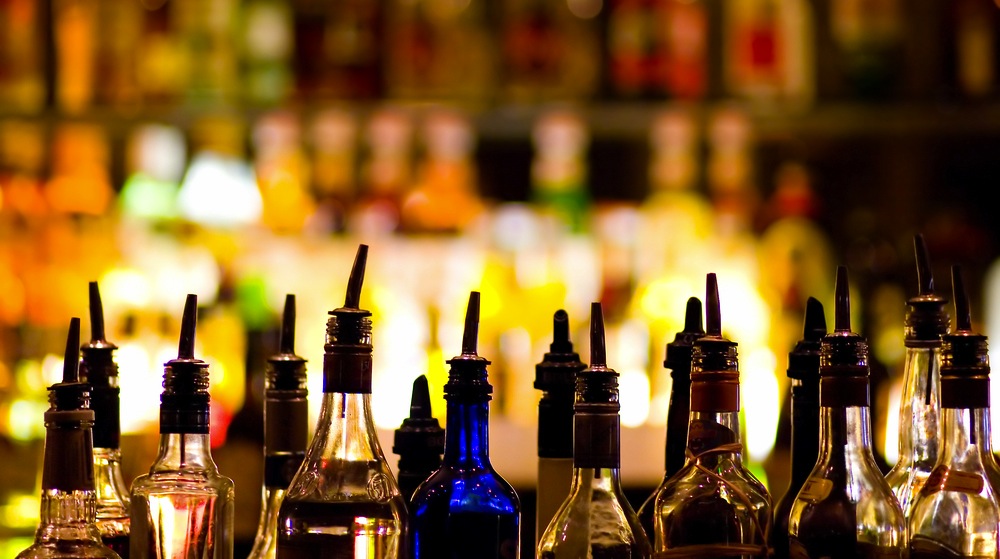 DES MOINES – A Clear Lake bar is being punished by a state agency for disguising cheap alcohol using a funnel and worn-out bottles of top-shelf brands.

The Iowa Department of Inspections and Appeals Division of Administrative Hearings investigated MNG Restaurant Corp or the Surf District, located at 619 Buddy Holly Place in Clear Lake following a tip from a possible banned and disgruntled former employee.

STATEMENT OF THE CASE

On July 2, 2019, the Iowa Department of Public Safety (“DPS”) filed a Hearing Complaint with the Iowa Alcoholic Beverages Division (“Division”) against M N G Restaurant Group, d/b/a M N G Restaurant Corp (“licensee”). The Hearing Complaint alleged that the licensee kept alcoholic liquor in a container other than the original package purchased from the Division, and/or for the purpose of refilling bottles with liquor, reuse original containers in violation of Iowa Code sections 123.49(2)(d) and/or 123.49(2)(e). On September 3, 2020, the Division transmitted the Hearing Complaint to the Iowa Department of Inspections and Appeals (“DIA”) to hold a contested case hearing. A Notice of Telephone Hearing was issued on September 4, 2020, and it scheduled the hearing for October 7, 2020 at 9:00 a.m.

The hearing was held on October 7, 2020 before the undersigned administrative law judge. Assistant Attorney General Alan Nagel represented the Division. Grant Maulsby appeared pro se on behalf of the licensee. Official notice was taken of Division Exhibits 1-5 without objection. The matter is now fully submitted.

Jeremy Bassett is an investigator employed by the Division. Investigator Bassett was assigned to investigate a complaint that had been submitted to the Division on October 10, 2019 by a “Scott Green.” The complaint alleged that the licensee was pouring cheaper liquor into premium liquor bottles; specifically pouring “Hawkeye” vodka and whiskey into the more expensive counterparts. The complainant also alleged that licensee was putting a mix of Hawkeye Whiskey and “apple pucker” into the Crown Royal Apple bottle.

The establishment had two liquor storage areas besides the bar area. One area was for new, unopened bottles of liquor and the other for empty, used bottles. In the area where new alcohol is held, a bottle of Jim Beam bourbon, Jack Daniels whiskey, and Seagram’s Canadian whiskey were gathering significant dust. (Id.) Empty single bottles of Grey Goose vodka and Absolute Citron vodka each were also in this storage area, which was supposed to contain only new bottles of liquor. (Id.) Investigator Bassett thinks it is more likely than not that these bottles were intentionally placed back in the new bottle storage area to be refilled later with the cheaper Hawkeye vodka.

Jeremy Maulsby told Investigator Bassett the establishment purchases their liquor from Quick Shop in Clear Lake. Investigator Bassett secured records of all the sales between the licensee and Quick Shop Liquor from January 1, 2019 and October 25, 2019. (Exhibit 3) During this period, only one bottle of Jack Daniels whiskey was purchased but 94 bottles of the cheaper, “well” liquor “Hawkeye” whiskey were bought. (Id.) During this same period only five bottles of Absolute Citron vodka, two bottles each of Tito’s and Absolute vodka, and no bottles of Grey Goose were purchased but 206 bottles of “Hawkeye” vodka were bought. (Id.) Similarly, only one bottle of Crown Royal whiskey and no bottles of Crown Royal apple were purchased. (Id.) However, 12 bottles of “Dekuyper Sour Apple Pucker” was purchased. (Id.)

Jeremy Maulsby denied both at the time of inspection and during the hearing that premium bottles of liquor were filled with cheaper liquor. Maulsby claimed that the empty bottle of Grey Goose and Absolute Citron were placed in the new bottle storage area inadvertently by a new bartender. At the time of inspection, Jeremy Maulsby initially claimed that the funnel was used for putting sugar into drinks. When confronted with the odor of alcohol coming from the funnel, he then claimed it was for the taps when pouring beer. At the hearing, Jeremy Maulsby said the funnel was used for everything from filling salt and pepper shakers to getting beer from the taps to make beer cheese.

At the hearing, Jeremy Mausby further testified that the labels of the Jack Daniels bottle and Crown Royal Apple bottle were worn due to bartenders being required to wipe down the bottles at close every day. He also thought the labels may be worn due to moisture created by nearby ice. Jeremy Mausby additionally said that the licensee will purchase more of the Hawkeye branded liquors because that is their “well” liquor and they have promotions for cheap well drinks. He also stated that the complainant is an ex-employee who turned into a regular patron. However, roughly two weeks prior to the complaint, licensee staff told the complainant that he was no longer welcome there. Jeremy Mausby surmised that the complaint was retaliation for that action. Finally, Jeremy Mausby said that not all alcohol is bought at Quick Stop liquor. He stated that sometimes he will buy alcohol from Fareway or have employees buy liquor and he pays them back. However, he did not disclose this to Investigator Bassett during the investigation.

The preponderance of the evidence established that the licensee M N G Restaurant Corp violated Iowa Code sections 123.49(2)”d” and 123.49(2)”e,” when Hawkeye branded liquors were poured into the empty, more expensive bottles of liquor. This judge does not find it reasonable that only one bottle of Jack Daniels was purchased from January 1, 2019 through October 25, 2019, especially considering the Jack Daniels bottle behind the bar was almost full and there was another full bottle of Jack Daniels in the storage area gathering dust. Further, during this same time, 94 bottles of Hawkeye whiskey were bought. This judge fully expects a bar to use more well liquor than premium liquor, especially when they have aggressive promotions featuring well drinks. However, one bottle of Jack Daniels bought when moving 94 bottles of a cheaper variety does not rise to meeting a common sense standard. Further, the bottle of Jack Daniels behind the bar looked heavily worn with labels starting to become physically detached. This indicates heavy usage and more likely than not repeated refilling. Other bottles present, besides the Crown Royal Apple bottle, did not show such wear. One would think if the wiping down of bottles and the moisture present from nearby ice was causing the labels to fall off, more bottles would be facing the same condition.
This judge also struggle to believe the licensee only needed two bottles of Tito’s and no bottles of Grey Goose vodka for over three quarters of a year but 206 bottles of the much cheaper Hawkeye vodka were bought. This judge is also concerned that with no bottles of Grey Goose bought in over eight months, the licensee still had an almost full bottle of Grey Goose behind the bar. The numbers do not add up to a level of reasonableness.
This judge agrees with the licensee that the complaint was probably brought out of spite. However, as a former employee, the complainant would have known where the licensee was vulnerable because he most likely previously witnessed or was a party to the alleged acts. The complainant was extremely specific in his allegations, which indicates some reliability, especially considering the totality of evidence corroborating the complaint. For example, the complainant alleged that Hawkeye whiskey and apple pucker was mixed and put into the Crown Royal Apple bottle. The Crown Royal Apple bottle behind the bar, like the Jack Daniels bottle, is incredibly worn and looks heavily used like it had been refilled. Upon reviewing the purchase records, no bottles of Crown Royal Apple were bought in over three quarters of 2019. However, 12 bottles of “Dekuyper Sour Apple Pucker” were purchased, which seems to substantiate the complainant’s allegation as the purchase disparities do not seem to add up. Further, this judge has similar concerns with the Citron vodka purchase discrepancies versus Hawkeye vodka purchased, especially considering some of the cocktails the licensee features on their menu specifically calls for Citron branded vodka.

These are serious violations that impact public health and safety. Putting liquor in used bottles poses all kind of health risks, especially if the bottles are not completely cleaned and dried. If a licensee is criminally convicted under Iowa Code sections 123.49(2)”d” or 123.49(2)”e,” the license must be revoked. See Iowa Code section 123.50(2). It is understood that the licensee was not criminally charged and this case relies on circumstantial and hearsay evidence. However, while the Division’s case probably would not survive a higher burden of proof, there is more than sufficient evidence to achieve a preponderance of the evidence burden.

It is not lost of this judge the economic impact this decision will place on the licensee and its employees. However, licensee management brought this burden on themselves when they chose to refill bottles of liquor or otherwise not keep alcohol in its original container. Further, it is more likely than not that the licensee was previously unfairly enriched by selling cheaper well liquor as premium liquor. Patrons should have a right to get the drink they ordered and paid for without any worry that the liquor they receive is actually a cheap substitute from an unknown used bottle. Further, as stated, it is a major health and safety concern for alcohol not to be kept in its original container or staff otherwise transferring liquor into used bottles. This judge is especially troubled by the fake Crown Royal Apple being created by mixing two alcohols together to create the imposter, adulterated liquor. For these reasons, a suspension is not only warranted but needed. Based on the evidence, the proposed twenty-one day suspension is appropriate.

ORDER
IT IS THEREFORE ORDERED that Liquor License LC0037691 issued to M N G Restaurant Corp, d/b/a MNG Restaurant Corp shall be suspended for a period of twenty-one (21) days. The 21 day license suspension shall commence at a time to be decided by the parties but no earlier than November 18, 2020. The licensee shall not sell any alcoholic beverages during the period of suspension.

IT IS SO ORDERED.

Appeal On The Merits