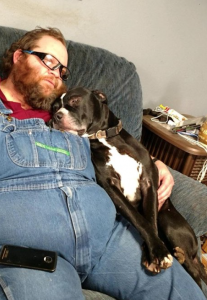 Photo of Remme and his dog, Balew, tweeted by Lauren Donovan of KCCI @LDonovanKCCI

FORT DODGE – A Fort Dodge man was shot by his dog after reportedly roughhousing with the canine, and now he’s been sent to Des Moines for further treatment of his injuries.

Fort Dodge police said Wednesday that earlier that morning, officers from the department were called to 2230 9th Ave South for a male with a gunshot wound. Officers arrived at the scene to find the injured 51-year-old Richard Remme, who lives at the residence.

Remme had a non life-threatening gunshot wound to his upper right thigh, police say, and the incident was determined to be an accident. Lauren Donovan of KCCI reports that Remme and his dog, Balew, were roughhousing when a gun discharged.

Remme was taken by Unity Point ambulance to the hospital for his injury. Later, he was sent to Des Moines for further treatment, Donovan said.