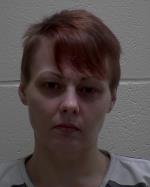 MASON CITY – An accused homicidal drunk driver has been taken to jail again after she allegedly killed a motorcyclist earlier this summer, and a trial date has been set in the case.

According to a report from the Iowa State Patrol, 31-year-old Nathan R. Wadsley of Belmond was riding a 2011 Harley-Davidson motorcycle northbound on Highway 69 near 150th Street outside Klemme, Iowa in Hancock county on Sunday, June 18, 2017. At the same time, 34-year-old Shannon L. Gamble of Garner was driving southbound on Highway 69 in a 2009 Chevy Impala, attempting to pass a southbound vehicle, when the vehicle struck Wadsely’s Harley head-on. The Harley came to rest in the east ditch and the Impala came to rest int he west ditch.

As a result, Gamble was transported by life flight to Mercy Hospital in Mason City with undisclosed injuries. Wadsley was pronounced dead at the scene.

However, further investigation led to the arrest and a charge of homcide by vehicle – operating under the influence brought against Gamble by the Iowa State Patrol. She was held in the Cerro Gordo county jail on $25,000 bond until she posted bond in November and was released.

However, a pre-trial violation was filed against Gamble, and Garner police picked her up this week. She was brought back to the Cerro Gordo county jail, where she is again held on $25,000 bond. A jury trial is scheduled for January 10.