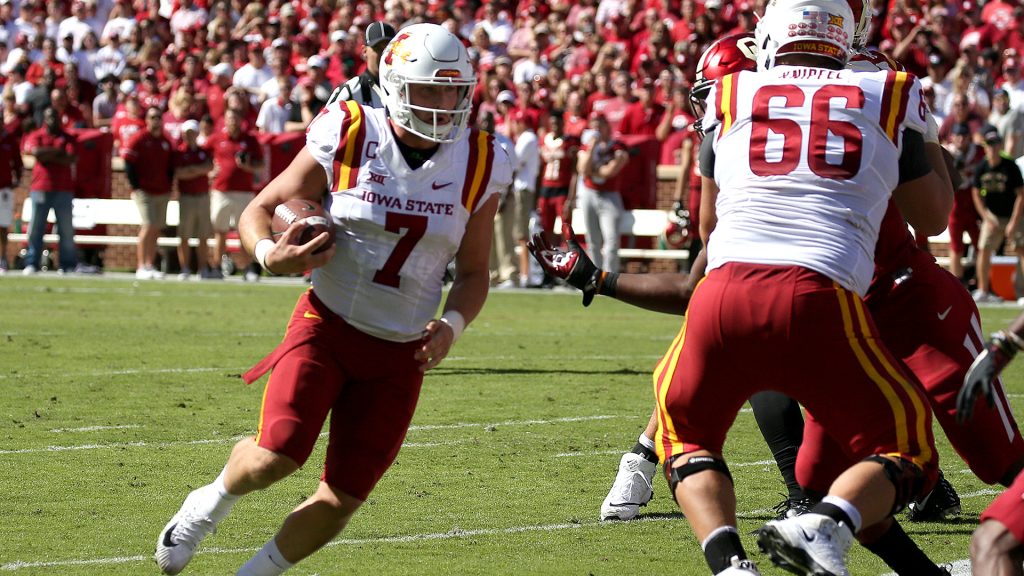 Kept replaces Jacob Park, who sat out the game with an undisclosed health issue.

In the first quarter, the Sooners jumped out to a 14-0 lead over Iowa State, but the Cyclones pounded a Garrett Owens’ field goal through the uprights to make it 14-3. Iowa State and Oklahoma traded a second-quarter touchdown and field goal to make the halftime tally 24-13.

Iowa State received to begin the second half and marched down for another Owens’ field goal. The Sooners would drive down inside Iowa State’s 10-yard line, but a Baker Mayfield fumble and Joel Lanning recovery ousted that opportunity.

From there, the comeback was on.

Kyle Kempt, making his first career start, and the Iowa State offense trucked 94 yards on seven plays. The drive was capped off by a 28-yard pitch and catch from Kempt to Marchie Murdock. The ensuing two-point conversion was successful and the Sooners and Cyclones were locked at 24-24 at the end of the third quarter.

An Oklahoma missed field goal to begin the fourth quarter gave the ball back to the Cyclones. Kempt connected with Trever Ryen on a short out and he outraced the Sooners for a 57-yard touchdown. Iowa State’s 21-unanswered points gave them a 31-24 lead with 12:46 left in the fourth quarter.

The Sooners would strike back. Oklahoma tied the game at 31-all on a 10 play, 75-yard drive. OU’s Dimitri Flowers scampered for a one-yard touchdown score.

Kempt and company had one more scoring drive in their arsenal. On third and long from the Oklahoma 25, Kempt went up top to senior Allen Lazard. Lazard hauled in the pass to put the Cyclones on top.

Keys of the Game
The turning point in the game was the Oklahoma fumble as they were looking to push it in for a touchdown. An errant handoff from Mayfield led to Lanning’s first career rumble recovery.

The ensuing 94-yard touchdown drive was a major turning point in this contest, tying the ball game. Iowa State held the Sooners scoreless in the third quarter, only the second time the Sooners have been shutout in a quarter this season.

Kempt led the go-ahead touchdown drive, tossing it up to Lazard for the touchdown. The Iowa State defense came up big, forcing Oklahoma to turn the ball over on a 4th and four attempt to seal the Cardinal and Gold upset.

Players of Note…
In the absence of Jacob Park, redshirt senior Kyle Kempt stepped up in a big way. The Oregon State transfer amassed 343 yards through the air on 18-of-24 attempts. He also fired three touchdown passes.

Redshirt senior linebacker, and today quarterback, Joel Lanning had a cornerstone game. The Ankeny, Iowa native was second on the team in tackles, tallying eight stops. His first career fumble recovery was a turning point in the game and he also tallied a sack. On the offensive side of the ball, Lanning was pivotal in short yardage situations. He was 2-for-3 through the air, putting up 25 yards. He also carried the ball nine times, racking up 35 yards.

Iowa State’s sophomore running back David Montgomery was great on the ground and through the air. He racked up 55 yards on 17 carries and a touchdown. He hauled in a career-high seven catches for 89 yards.

On the outside, redshirt senior Trever Ryen was a big part of the Iowa State passing attack. He caught four balls for 99 yards and a touchdown.

Defensively, Reggie Wilkerson led the way for the Cyclones. He made a team-high, and career-high, 13 tackles on the outside that included nine solo stops.

Cyclone Quick Hits
*The win marks Iowa State’s first against the Sooners in Norman since 1990.
*Iowa State snaps a 20-game losing streak against ranked opponents.
*This is the first time that Cyclones have toppled an AP top-five opponent in program history
*Iowa State also picks up its first win against the Sooners in 19 outings
*Kyle Kempt and Jacob Park become the first two Cyclones to throw for 300 yards in the same season.
*Allen Lazard brought in his 20th career touchdown grab, passed Lane Danielson in career receiving yards (2,728) to rank No. 2 all-time in program history.
*Reggie Wilkerson tallied a career-high 13 tackles
*Garrett Owens pushed through a season-long 42 yard field goal, went 3-3 on the day and tacked on three extra points.

Up Next
Iowa State will face Kansas next Saturday, October, 14 at 11 a.m. The game will be on FSN.