FOREST CITY – A man convicted of sex crimes in at least two North Iowa counties is faces new charges of sex crimes against a child.

Additionally, Bonner faces a sex abuse charge in Worth county.

Bonner was convicted in Cerro Gordo county in 1991 of third-degree sexual abuse. He was also convicted in Winnebago county in 2010 with dissemination of obscene material and sexual exploitation of a minor. 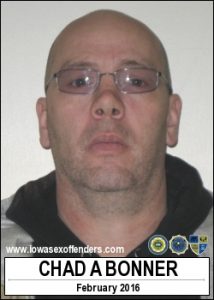