CLEAR LAKE – A Des Moines man has been put on probation for causing thousands of dollars of damage to property in Clear Lake.

Christopher J. Larson, age 31 of Des Moines, was sentenced last week to 5 years of probation for an incident that took place back on April 28, 2016. After damaging property at 705 South Shore Drive, he was charged with felony first-degree criminal mischief due to the extensive damage, which approached value of $30,000. A plea deal to the lesser charge of second-degree criminal mischief was reached. 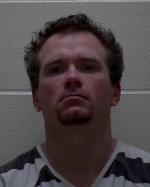