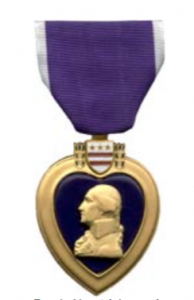 Don Coderre of West Des Moines and Frank Hawk of Norwalk will each receive a Purple Heart medal. Grassley helped both veterans provide documentation to the Army Review Board to receive their medals.

Coderre served in the Department of the Army, Combat Infantryman from 2004 to 2007. In 2005, Coderre was stationed at a Forward Operation Base while serving in Iraq as an Army Specialist (SPC) during Operation Iraqi Freedom with now Sergeant Major of the Army Daniel Dailey. After Coderre was wounded in action in 2006, he was honorably discharged from the Army in 2007. Grassley and Dailey wrote documentation to the Army Review Board to help prove Coderre deserved a Purple Heart.

Hawk served in the Department of the Army where he served as a Specialist (SP4) in the Vietnam War from 1967 to 1969. During the conflict, Hawk was a part of an Airmobile Division, leading a squad of troops dropped off by helicopters to provide assistance to fellow soldiers and engage the enemy in remote locations of Vietnam. After being wounded in combat, Hawk was honorably discharged in 1969, but served in the U.S. Army Reserves until 1973.

Accompanying his Purple Heart medal, Hawk has compiled a multitude of distinguished awards and honors for his service including: the National Defense Service Medal, the Vietnam Campaign Medal, the Combat Infantryman Badge and the Cold War Recognition Certificate, given to those who served during the period of the Cold War.

“It’s an honor to present these medals to Don and Frank. Helping veterans obtain the medals they deserve for their service in defense of freedom is tremendously gratifying,” Grassley said. “Iowa is home to more than 226,000 brave men and women like them who answered the call to serve in the Armed Forces. As a nation, we owe them a debt of gratitude.”

The Purple Heart is awarded to members of the armed forces of the U.S. who are wounded by an instrument of war in the hands of the enemy and posthumously to the next of kin in the name of those who are killed in action or die of wounds received in action. It is specifically a combat decoration. Introduced as the “Badge of Military Merit” by General George Washington in 1782, the Purple Heart is also the nation’s oldest military award.