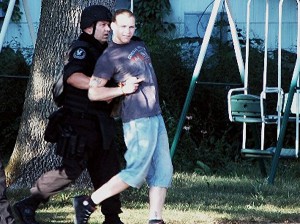 Levi Andersen, as he was arrested in 2012 after a standoff with police near the Fareway store in downtown Mason City.

MASON CITY – For the second time in three years, a man has caused havoc for law enforcement, and he is back behind bars after a chase through a trailer park.

A large law enforcement presence was observed at the Gracious Estate trailer park, 700 South Eisenhower Avenue, Tuesday December 8 at about 3:00 PM.  They were searching for 28-year-old Levi James Andersen who was there.  Andersen was wanted on a number of warrants connected to dangerous offenses out of nearby Freeborn county, including weapons, drugs, fleeing police and much more.  Andersen held police at bay three years ago in downtown Mason City and a swat team and armored vehicle had to be called to the scene to take him in that time.

On Tuesday, tactical officers with the special operations group arrived, and Andersen fled.  However, there was too many officers and he was soon caught and arrested.  He had what police suspect was methamphetamine and a loaded handgun when he was finally stopped and subdued.

As a result of the arrest of Andersen, two additional warrants were served that day.  One, at the residence Andersen fled from, and another, at a different, undisclosed residence in Mason City.  Officers discovered more firearms, ammunition and possible silencers.  Some of the firearms may have been converted into automatic weapons.

Andersen was taken to jail on numerous warrants out of Freeborn county, where he was previously arrested for a motor vehicle pursuit in June of this year.  He had also been arrested in Douglas county, Minnesota in March of this year for possessing a firearm as a felon and carrying  a weapon without a permit.

Police are working at Gracious Estates after #MCPDWarrantArrest. Area is safe but officers need space to work. 2758 pic.twitter.com/UNHJ2qU7N5