This news story was published on December 6, 2015.
Advertise on NIT • Subscribe to NIT

MASON CITY – A Mason City man already convicted earlier this year of assault after police said he bit a woman on the arm and tried to strangle her was arrested again this weekend at the same address for domestic assault.

Police were again called to a residence in the 900 block of 11th Street NE to deal with 61-year-old Wayne Leroy Everett after a call was made about a physical domestic situation on Saturday, December 5 at 9:15 PM. Everett was jailed on a charge of serious domestic abuse assault. He remained held on $5,000 cash bond.

Everett was accused of a assaulting a female on July 16, 2015 “by biting her chin, left forearm, right bicep and causing bruising to these areas. He is also accused of trying to strangle the victim around the neck which left redness,” police told NIT. The incident occurred in the 900 block of 11th Street NE. Everett was transported to jail that day on two charges: Willful Injury and Possession of Drug Paraphernalia. He later pled guilty to assault.

Everett is a convicted sex offender. He was convicted in 2003 in Cerro Gordo county for indecent exposure, and in Minnesota in 2009 for third degree criminal sexual conduct. 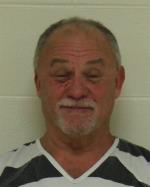