Blodgett puts Ragan in the crosshairs, floats idea to oust her from office 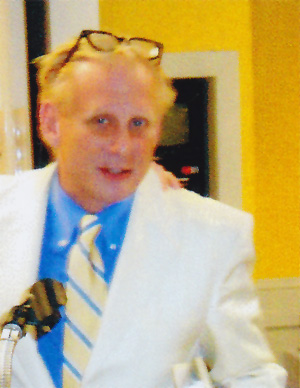 MASON CITY – Republican strategist Todd Blodgett is up to his old tricks again, and North Iowa’s Democrats are worried that his meddling could cost them a state Senator.

Gov. Terry Branstad, a longtime friend of the Blodgett family, spoke in Mason City on October 14, about proposed changes in Iowa’s Medicaid program. Prior to this event, which was held at the Historic Park Inn, state Senator Amanda Ragan had organized a ‘Listening Post’ to hear the views of her constituents.

Ragan, a Democrat who is now serving her fourth term, represents many of the same north Iowa communities – including Mason City, and Clear Lake – that Mr. Blodgett’s father, Dr. Gary B. Blodgett, represented for many years in the state Legislature. Branstad says that Medicaid costs are up 73 percent since 2012, and are “unsustainable” absent reform. His proposals, which include contracting out to providers, have drawn political fire from Ragan, and most Democrats.

In her last three re-election campaigns, Ragan averaged over 60 percent of the vote. This is impressive, given that District #27 is one in which most voters are registered Republicans. It also has Democrats worried, because, as a longtime Democratic party activist told NIT, “Todd Blodgett may be well to the right of Genghis Khan, and he’s a gun nut. But he sure knows how to get his friends elected.” Another bad omen, this Democrat said, is Gary Blodgett’s fundraising abilities. “When Doc ran against Joe LaPointe, nobody thought a conservative Republican could ever take that seat away from us. But we didn’t know that Dr. Blodgett would raise over $50,000 within a few weeks of declaring his candidacy.” The Blodgett campaign outspent LaPointe by about 30-to-1 in that race in 1992.

We spoke with a member of the Cerro Gordo county Democratic Central Committee, who provided us with some insight on condition of anonymity. This person said that, “Amanda has great respect for Dr. and Mrs. Blodgett, and she’s well aware of the piles of money that they’ve raised for Terry Branstad, Senator Grassley, and Steve King” and former Congressmen Tom Latham, Jim Nussle, Fred Grandy, and others. “Amanda knows Gary Blodgett has raised lots of money for Jay Urdahl’s campaigns, too. I’m sure that she’d like to be in his pocket about right now, the same way Urdahl has been for all these years.”

According to articles in The Washington Post, and published by the Southern Poverty Law Center, and Wikipedia, Todd Blodgett was a protégé of the late Lee Atwater, who was the premier ‘negative campaign strategist’ of his time. Atwater and Blodgett met while Blodgett served on the White House staff of President Ronald Reagan, and in Nov., 1987, Atwater persuaded his prize pupil to join the campaign staff of then-Vice President George H. W. Bush. Following the 1988 election, Todd Blodgett worked for Atwater at the Republican National Committee, where he served on the staff there until 1991.

Globe Gazette political reporter John Skipper wrote in his weekly political column on Oct. 18 that Blodgett has threatened to line up an “Independent candidate” to run against Sen. Ragan, who is up for re-election in 2018. The objective, according to Mr. Skipper, would be to siphon off enough Democratic votes from Ragan, and elect a Republican. Mr. Blodgett likened the idea to the 1992 presidential campaign, in which Ross Perot siphoned enough votes away from then-President Bush to elect Bill Clinton.

Normally, Democrats tell NorthIowaToday.com, such threats would be dismissed. But if Blodgett follows through, one said, “there’s real potential, under this scenario, for Amanda’s defeat.” A Mason City Democrat told NIT she’s “worried”, because “Todd Blodgett is tight with lots of North End rednecks. He drinks with these crazy racists, who detest individuals of color, and undocumented immigrants. These red-necky people probably don’t even like the idea of women being allowed to vote.

“Todd Blodgett talks their talk, about guns and all that crazy, right-wing stuff that these rednecky people like to talk about while they drink, and smoke.” If Blodgett lined up a well-liked “North End redneck”, she says, to run against Amanda Ragan, “Why, he and his dad could easily raise a couple hundred thousand dollars to throw against Amanda.” This could elect a GOP state Senator for district #27, they say.

“Leave it to Toddy Boy to find a way to gang up on a friend to working people,” a retired north Iowa Democrat told NorthIowaToday.com. “I’ve known Todd since he was a student at MCHS. He’s the same now as he was then: dangerous, and highly manipulative. It’s a shame he ever came back here to Iowa, but I suppose he wants to make sure he stays in his daddy’s Will.”

Barb Hovland, who serves as the chairman of the Cerro Gordo Republican Central Committee, recently warned her fellow Republicans to be wary of another local Democrat, Alex Kuhn. Mr. Kuhn is seeking re-election to the City Council of Mason City, where he has been the city’s At-Large Councilman since being elected in 2011.

Kuhn, who comes from a prominent Democratic family, is widely perceived to have a limitless political future – which Mrs. Hovland and other GOP stalwarts wish to nip in the bud. “I’m not worried about Alex,” a friend of Kuhn’s told NIT “See, he’s a damn good candidate. He’s rich, handsome, and energetic. And, maybe most important of all, Alex Kuhn and Todd Blodgett are good friends. I think Alex learned the same thing Jay Urdahl and Phil Dougherty did. And that is, if you want to last long in north Iowa politics, even if you’re a Democrat, it’s easier if you’re on the good side of the Blodgett family. Sad, but true. Unfortunately.”

Came in point, in 2014, Gary Blodgett and his wife, Sandy, raised campaign funds for Casey Callanan, who is now a Cerro Gordo county Supervisor, and for Gov. Branstad, and for U. S. Rep. Steve King. In just a few weeks’ time, a letter that Blodgett signed on Mr. Callanan’s behalf pulled in over $35,000 from about 150 donors. Dr. Blodgett first began raising political cash for Republicans in 1976, when he served on the Finance Committee of the presidential campaign of then-President Gerald R. Ford. He’s been at it ever since, and until earlier this year, he showed no signs of slowing down. But if he has decided to retire from filling the coffers of his favored candidates, political observers say, Todd Blodgett will take over for his father in this endeavor. The fear of this bothers some Democrats, N.I.T. was told on Oct. 19.

NorthIowaToday.com will stay on top of any developments regarding this story, and
continue, as always, to keep our readers and subscribers apprised.