This news story was published on August 26, 2015.
Advertise on NIT • Subscribe to NIT 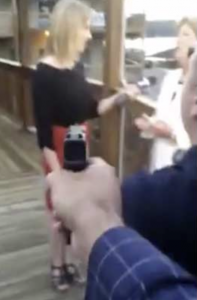 A screen grab of a video posted to social media, purportedly by the shooter

The two reporters – Alison Parker and Adam Ward – worked for WDBJ7. WDBJ7 news reported that Vicki Gardner of the Smith Mountain Lake Chamber of Commerce was hurt in the shooting and was in surgery. A person of interest – Bryce Williams AKA Vester Flanigan – has been captured. It has been reported that Williams posted video of the killing to a social media account and shot himself as police closed in.

It has reported that Williams became disgruntled when he worked at the TV station as racial remarks were made to him.

This is the suspected shooter, Vester Flanigan, who is also known as Bryce Williams. He is a former WDBJ7 employee. pic.twitter.com/ngXrqHVLmw

Alison and Adam always had a fun time together. Here are some behind-the-scenes pictures. http://t.co/bglHxG2jXC pic.twitter.com/X74EflXqlz