She was ordered to pay $617.90 in fines, fees and restitution, but records show she has not yet made a payment.

Demaris also plead guilty to driving with a revoked license, as part of the same arrest incident. She was ordered to pay $1,844.70 in fines and fees and again has made no payment. She had pleaded guilty to drunk driving earlier this year, causing her to lose her license. She has failed to make a payment on the $1,857.50 she was assessed in that case, as well. 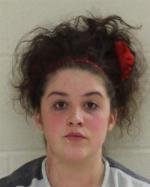 One Response to Mason City woman guilty of theft