MASON CITY – A Manly woman who was held at the Beje Clark halfway house after her release from a brief prison stint for helping rob a bank and then stole from Wal-Mart is accused of escape.

Inmates at the Beje Clark halfway house routinely leave for work or other approved reasons but are supposed to return by a designated time. When they fail to return, they are listed as an escapee. Emily Elizabeth Francis, age 32, failed to return to Beje Monday and was sought by police. She was brought to the county jail Monday evening and held on bond until she goes before a judge.

Francis was sent to prison in June of 2012 and then released in June of 2013 for helping rob a downtown Mason City bank.  She still owes Iowa courts $9,427.44 in that case. Francis was caught earlier this year stealing from Wal-Mart and sent to jail for 7 days and also placed in Beje Clark. She is now accused of violating her probation in that case. Records also show that her parole has been revoked. 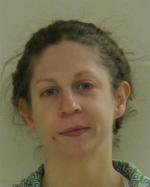 3 Responses to Bank robber accused of escaping from Beje Clark