MASON CITY – A wanted Mason City man was located at a local hotel after being on the lam for months.

Timothy Charles Cassady, age 39, had been wanted since July on a warrant for violating probation in a criminal mischief case. He was also wanted on a second warrant for theft in the third degree involving injury of a store employee after an incident in September. Police located Cassady Thursday morning at the Clarion Inn, 2101 4th Street SW, and took him to jail, where he is being held on $2,000 bond.

Cassady is also wanted in Missouri and is held on $25,000 bond on that warrant.

In May of 2002, Cassady supplied alcohol to a Mason City teen who drowned in the Winnebago River. He paid only a fine for that crime. 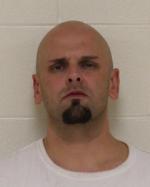 One Response to Wanted Mason City man arrested on warrants