This news story was published on August 14, 2014.
Advertise on NIT • Subscribe to NIT

MASON CITY – In the state of Iowa, a person is guilty of animal torture, regardless of whether the person is the owner of the animal, if the person inflicts upon the animal severe physical pain with a depraved or sadistic intent to cause prolonged suffering or death.

Mason City police said Thursday that officers went to the home of 26-year-old Dacota Witham and placed him under arrest for a violation of Iowa code 717B.3A – animal torture – as described above.

Animal cruelty is an aggravated misdemeanor which is punishable by up to 2 years in prison and/or a $2,000 fine.

Earlier this week, police said that as they investigated a child endangerment and domestic abuse situation at Witham’s home – charges he was originally arrested on – “a rotting dog carcass was discovered in the garage.”

Witham was charged with cruelty to animals for his alleged “inhumane treatment” of the dog before it died.

According to social media, the dog was a female named Kiara. Before police went to Witham’s house to investigate, the dog’s owner had “went out to the garage to retrieve her personal items and discovered Kiara stuffed in (what looks like a garbage bag inside) an empty dog food bag.”

Prior to his arrest, on Wednesday, Witham announced via social media that he is “getting a cat” along with a picture of a orange kitten.  Later, on Thursday apparently as he was being arrested, Witham wrote “Going to jail friends please write me 17262 lark ave mason city ia”. 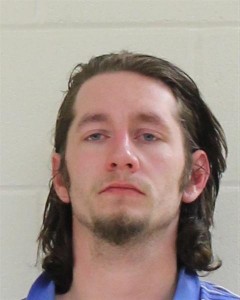