Sen. Ragan: “It is not appropriate for adults to host underage drinking parties” 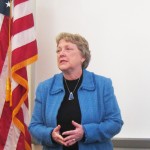 DES MOINES – Senator Amanda Ragan said Friday that the Senate sent a message this week when it approved a bill aimed at curbing underage drinking parties.

“In a unanimous vote, the Senate approved ‘social host’ legislation,” Sen. Ragan said. “SF 2310 sends a message that it is not appropriate for adults to host underage drinking parties. Those who do will pay a $200 penalty for the first offense and a $500 penalty for a second or subsequent offense.”

Ragan said it is currently illegal to provide alcohol to anyone under 21, but it is not against the law to host a party for underage drinkers on your property if you do not provide the alcohol. Many cities and counties have ordinances that prohibit hosting parties for underage drinkers, but state law does not prohibit it.  Mason City and Cerro Gordo county both have social host laws.

“Underage drinking is a serious health and safety problem,” Ragan explained. “In 2012, more than 200 Iowans under the age of 18 were convicted of Operating While Intoxicated.”  She cited a National Highway Traffic Safety Administration, which states that car crashes are the leading cause of death for teens. About a quarter of those accidents involve an underage drinking driver.

8 Responses to Sen. Ragan: “It is not appropriate for adults to host underage drinking parties”