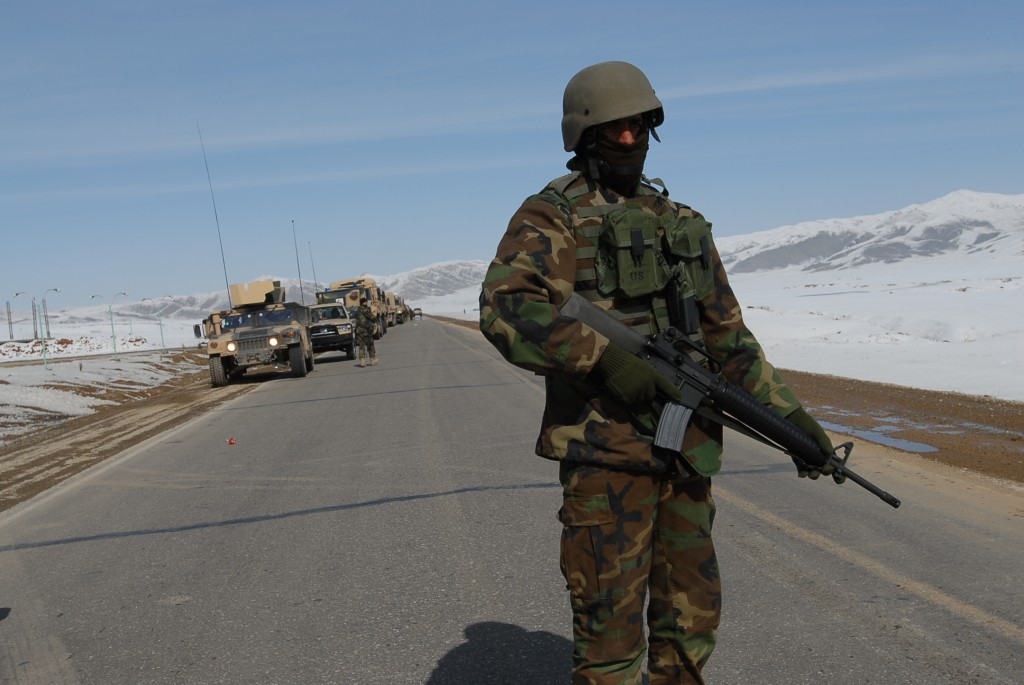 The operation, which took place Jan. 27 – Feb. 4, means “Eagle 144,” in English. It is a process to eliminate hostile threats from the Sangin Valley, Helmand province, Afghanistan, prior to the upcoming national election in order to offer a better environment for potential voters and the local populace.

The operation was conducted weeks before the Afghan presidential elections, which are scheduled to take place April 5. The current president of Afghanistan, Hamid Karzai, is not eligible to run for re-election due to term limits, making this the first transfer of the presidency since his inauguration in 2004 and the first democratic transition of power in the history of Afghanistan.

“They’re sharing stories about the election and belief in their government,” said Col. Christopher Douglas, the team leader of Security Force Assistance Advisor Team 2-215. “I believe this gives people the opportunity to see that the future is bright because these operations are being executed for Afghans by Afghans with no coalition presence visible to them during the operation.”

The ANSF partners are working together to build trust within the local populace to achieve a more stable and secure environment for the election as well as the future of Afghanistan, Helmand province, and Sangin Valley.

“This shows that it’s an Afghan election process,” said Douglas, whose team is stationed out of Camp Lejeune, N.C. “We’re not driving it. It shows faith in the system, now they’re gaining more of that confidence. We can’t force them to do something, so it comes down to inspiring them.”

During May 2012, the Afghan and U.S. governments agreed a contract needed to be created to establish how many, if any, American forces would remain in Afghanistan following the end of the North Atlantic Treaty Organization mission in 2014. Without such a contract, known as the Bilateral Security Agreement, the U.S. must pull all forces out of the country by the end of the year.

The two governments began working on the agreement Nov. 15, 2012, which would allow a contingent of U.S. troops to stay in the country in an advisory role.

Despite the approval of the Loya Jirga, or “grand council” on Nov. 24, 2013, and increasing support from Afghanistan and the international community, President Karzai has yet to sign the agreement.

Due to the hesitation from President Karzai, the next president of Afghanistan may be responsible for signing the agreement. This places the fate of the BSA in the hands of the voters —the people of Afghanistan — as they choose their next leader.

“It’s a very exciting time,” said Maj. Paul D. Tremblay, deputy team leader, SFAAT 2-215. “It’s an election where the people can choose a leader who’s going to take them the rest of the way.”

The operation to clear the Sangin Valley of hostile threats was met with resistance and casualties, but also several milestones of success.

Seeing only Afghan uniforms during the operation helped build the locals’ confidence in the ANSF. In turn, some locals provided the forces with information on insurgent movements and known locations, as well as locations of improvised explosive devices and explosives labs.

“As (the operation) went on through the Sangin area with 2nd and 3rd Brigades, they were approached by some locals who advised them they missed some IEDs during the clear,” Douglas said. “That was a great surprise. It showed confidence in the ANA’s ability to work with the locals and them feeling comfortable enough to come up to members of the ANA or the police and work with them to create a more secure environment in their community.”

When they first entered the Sangin Valley in 2006 after the resurgence of the Taliban, the coalition forces had the lead role in all combat operations. During the course of the campaign, the lead has steadily been turned over to Afghan forces as the coalition took on an advisory role.

Oqab 144 marks one of the first operations in the region during which the populace hasn’t seen a coalition force presence. Security Force Assistance Advisor Team 2-215 played a silent role in the operation, offering only advisory assistance and minimal relief in casualty evacuations.

“They’re in the lead,” Douglas said. “We’re here and able to watch through some of our assets, but the big thing is seeing their excitement for how well things are going for them and hearing their stories of sharing a big success together. Now they’re out there doing it.”

“We’re kind of like father figures, and we’re watching our children grow and flourish,” Tremblay said. “They have it, you can see it in their eyes. They just need to continue to grow and mature. Once they get in the highest leadership positions, they’ll be unstoppable.”

“They have an incredibly capable staff,” Tremblay said. “They have all the enablers and they’re learning each and every day. This operation is certainly demonstrating their capacity to take independent action and learn and grow as they progress.”

“It’s one of the most complex problems I’ve ever seen in my 18 years in the Marine Corps,” Tremblay said. “It’s fascinating to study and the more you do, the more you learn about the intricacies at play here and what can potentially be done in the future.”

The SFAAT considered the operation to be a success and is dedicated to helping the ANA in the region become completely sustainable and self-sufficient.

One of the obstacles the SFAAT and the ANA face in the region is the annual fighting season, tied to the weather and poppy harvest.

The Sangin Valley is known by many as a hotbed for nefarious and illegal activities. It’s strategic in its relevance to major corridors such as Route 1 and Route 611.

Drug runners and insurgents often use Route 1, which runs all the way through Afghanistan from Pakistan to Iran. The two routes are a crossroads for both trade and drug trafficking. Much of the Taliban’s funding comes from the profits of the poppy harvests. Black-tar heroine is extracted from the poppy plants and the drugs are shipped all over the world.

The Taliban control much of the heroine trade and are dependent on the industry. When the weather cools off, the insurgency turns toward facilitating the poppy planting. When planting begins, fighting almost instantly ceases.

“It’s a constant disruption mentality,” Tremblay said. “Whether it’s Marines, British or Afghans, their ability to consistently disrupt the activity of the insurgents by projecting combat power despite a season prevents the insurgent from feeling comfortable enough to go in and interact with the populace, plant an IED or set up a firing position.”

The progress that has been made since the coalition first entered the Sangin Valley can be measured by the success of Oqab 144 and the relationship building between the ANSF and the local populace.

“Without this group we would not have reached this stage,” said Col. AbdulHai Neshat, executive officer, ANA 2nd Brigade. “Due to the Marines’ hard work along side us, we can lead our units. They’re very helpful and useful.”

Success in the region did not come easily. Many service members from coalition forces and the ANSF have paid the ultimate price to bring stability to the war-torn area.

“I don’t think we could ever put a number on the blood, treasure and heartache that has been poured into this area,” Tremblay said. “The blood, sweat and tears, the brothers we’ve lost, the horrific injuries sustained and the invisible ones that keep you up at night are beyond description. I don’t think we’ll ever be able to capture what has been sacrificed to get us to this point. Especially when you read in the media what’s going on in certain areas in Iraq, it’s hard not to question: ‘Has it been worth it?’ In my opinion, the answer is absolutely, ‘Yes.’ All of that sacrifice has led to an opportunity we’re seeing start to grow and gain momentum today.”

With all the progress that has been made in the past eight years, there is still more to be done.

“I’d like to say, on behalf of my personnel and soldiers, thank you to the Marines and the U.S. in a common (effort) for helping Afghanistan,” Neshat said. “Without U.S. support, we would not be able to stand as a country. Hopefully in the future the U.S. will continue the support and help Afghanistan and not leave. All people in Afghanistan want peace in this country and to live a normal life. It’s very important to help us. These are the wishes of all of Afghanistan.”