President says country on the way to “fully implementing” Obamacare 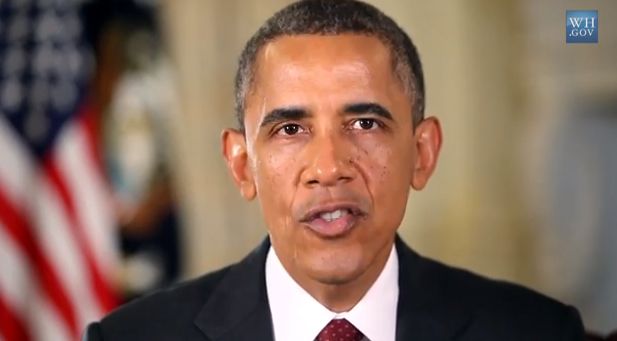 WASHINGTON  – In this week’s address, President Obama said the country is on the way to fully implementing the Affordable Care Act and “helping millions of Americans”.   The president also blamed politics for slowing acceptance of the new policies.

“Unfortunately, a group of Republicans in Congress are working to confuse people and are even suggesting they will shut down the government if they cannot shut down the health care law,” the White House said Saturday.  “Health insurance isn’t something to play politics with, and the President will keep working to make sure the law works as it’s supposed to, and he encourages everyone to visit HealthCare.gov to find out more about the law and how to sign up.”

The president also went back to one of his recurring themes for the middle class, what he calls “a better bargain”.

“We need to rebuild an economy that rewards hard work and responsibility; an economy built firmly on the cornerstones of middle-class life. Good jobs. A good education. A home of your own. A secure retirement. And quality, affordable health care that’s there when you need it,” the president said.

“Right now, we’re well on our way to fully implementing the Affordable Care Act. And in the next few months, we’ll reach a couple milestones with real meaning for millions of Americans.”

The president pointed to free checkups, mammograms, and contraceptive care as benefits that the already-insured have received. “Discounted prescription medicine on Medicare,” he continued.  “The fact you can stay on your parents’ plan until you turn 26. And much, much more. And it’s okay if you’re not a fan of the Affordable Care Act – you can take advantage of these things anyway.”

President Obama reminded the public that open enrollment in the new insurance marketplace begins October 1st while  chastising Republicans for thwarting public acceptance of the polices.

“There’s a group of Republicans in Congress working hard to confuse people, and making empty promises that they’ll either shut down the health care law, or, if they don’t get their way, they’ll shut down the government.

“If you don’t have insurance, beginning on October 1st, private plans will actually compete for your business. You can comparison shop in an online marketplace, just like you would for cell phone plans or plane tickets. You may be eligible for new tax credits to help you afford the plan that’s right for you. And if you’re in the up to half of all Americans who’ve been sick or have a preexisting condition, this law means that beginning January 1st, insurance companies have to cover you – and they can’t use your medical history to charge you more than anybody else.”

Many Members of Congress, in both parties, are working hard to inform their constituents about these benefits, protections, and affordable plans. But there’s also a group of Republicans in Congress working hard to confuse people, and making empty promises that they’ll either shut down the health care law, or, if they don’t get their way, they’ll shut down the government.

Think about that. They’re actually having a debate between hurting Americans who will no longer be denied affordable care just because they’ve been sick – and harming the economy and millions of Americans in the process. And many Republicans are more concerned with how badly this debate will hurt them politically than they are with how badly it’ll hurt the country.

Some even say that if you call their office with questions about the law, they’ll refuse to help. Call me old-fashioned – but that’s lousy constituent service. And it’s not what you deserve.

See, in the states where governors and legislatures and insurers are working together to implement this law properly – states like California, New York, Colorado and Maryland – competition and consumer choice are actually making insurance affordable.

So I’m going to keep doing everything in my power to make sure this law works as it’s supposed to. Because in the United States of America, health insurance isn’t a privilege – it is your right. And we’re going to keep it that way.

Thanks. And have a great weekend.