Webster County, IOWA — At a 4:00 PM press conference today in Dayton, Iowa, the Department of Public Safety’s Division of Criminal Investigation disclosed more evidence in the investigation and search for Kathlynn Shepard. In particular, blood found at a hog confinement has been identified as belonging to Kathlynn Shepard.

During the initial search of 3023 400th Street in rural Pilot Mound, Iowa, several areas of what appeared to be blood were discovered and collected. Two of these items were on the ground and one was on the inside of the tailgate of the pickup. All three initially tested positive for human blood. DNA testing was completed this morning, and the blood is that of Kathlynn Shepard.

Kathlynn Shepard is still missing and the search continues.

DCI is now providing a photo of Klunder’s red Toyota pickup. Please note that there are some unique items on the truck. It has a silver Tommy Lift tailgate and a silver toolbox which is located only on the driver’s side. There is no license plate on the vehicle. Instead, there is a DOT paper plate behind the driver’s side on the back window. Anyone who may have seen this vehicle between the hours of 4:50 PM and 8:20 PM on Monday, May 20, 2013 should call law enforcement. 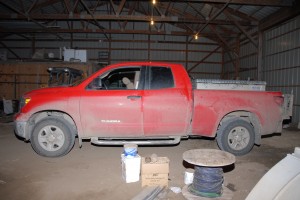 In addition to the areas already pointed out on the map given yesterday, law enforcement is now looking at areas approximately 10 miles north and northwest of the site where Klunder’s body was located. In support of these search efforts, area farmers are being asked to search their own outbuildings and surrounding grounds. Area residents that have any abandoned buildings on their property are asked to please look in and around them, or call law enforcement and a team will search the building for you.

Late yesterday investigators were notified that the 12 year old girl who was abducted along with Kathlynn chose to tell her story to several members of the media. We will confirm for you that in general, the statements she made to media are consistent with what she gave law enforcement shortly after her escape. The girls were lured into Klunder’s truck with the offer to earn money for mowing grass. The girls indicated to Klunder that they had to ask their parents, first. He then offered to drive the girls to their house. However, Klunder did not stop at their homes, indicating they could call on his cell phone when they arrived. Once they arrived at the hog confinement, Klunder took the pair to an office attached to hog building and zip tied both of their hands. Klunder took Kathlynn out of the building. That’s when the 12 year old was able to free her hands and escape, taking a gun with her. The gun is a tool used to euthanize animals and had the appearance of a real gun. The 12 year old ran into the woods and discarded the gun. She waited a short time and then ran through a wooded area and across a field to a farmer’s house. That’s when the first 911 call was placed.

Additionally, today the State Medical Examiner’s Office completed the autopsy of Klunder’s remains. The manner of death is classified as suicide. The cause of the death is hanging.

There have been several questions from media surrounding Klunder’s wife Lisa. Mrs. Klunder has been completely cooperative with law enforcement and is not a suspect.

Finally, there were several reports earlier today that a body was found today during the search. To clarify, the bones that were found were not human.

9 Responses to Blood Evidence Confirmed as Belonging to Kathlynn Shepard