‘Anchoring’ long putters to be barred in golf 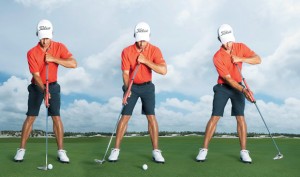 FAR HILLS, N.J., May 21 (UPI) — The leading rule makers for golf are banning so-called anchored strokes, affecting those who use long putters as of 2016.

The U.S. Golf Association and the Royal and Ancient Golf Club issued a statement Tuesday that Rule 14-1b will bar players from putting the shaft of long putters against their bodies while making a stroke.

Long putters can still be used but must be swung without anchoring.

USGA President Glen D. Nager said the change is “necessary to preserve one of the important traditions and challenge of the game — that a player freely swing the entire club.”

The new rule will read:

“In making a stroke, the player must not anchor the club, either ‘directly’ or by use of an ‘anchor point.’

“Note 2: An ‘anchor point’ exists when the player intentionally holds a forearm in contact with any part of his body to establish a gripping hand as a stable point around which the other hand may swing the club.”

One Response to ‘Anchoring’ long putters to be barred in golf