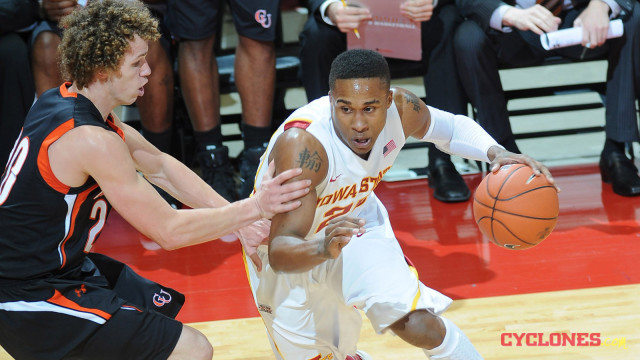 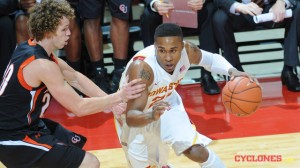 LAS VEGAS – Sean Kilpatrick lead #22 Cincinnati past the Iowa State Cyclones Friday night in Las Vegas with a 32 point effort in the third round of the Global Sports Classic .

Iowa State was lead by Tyrus McGee’s 22 points while Korie Lucious chipped in 12.

The Cyclones shot just 37% from the field while making just 12 of 21 free throws.

Cinicinnati, meanwhile shot a red-hot 92% from the charity stripe, making 23 of 25 free throws, which was likely the difference in the game.

Kilpatrick came up big at the free-throw line late in the game, making all 16 of his fouls shots after coming into the game connecting on just 5-of-13 at the line. UC finished the contest 23-of-25 at the charity stripe compared to ISU’s 12-of-21 performance.

“We came back because of our effort on the glass,” Iowa State head coach Fred Hoiberg said. “We did a great job making the extra pass late in the game, but I thought we forced some shots early in the second half and we couldn’t dig ourselves out that hole.”

UC went ahead 31-27 with under three minutes left, but Korie Lucious hit a pair of treys in the closing minutes of the opening stanza to help the Cyclones go into the break with a tie.

Kilpatrick had 18 points in the first half to pace the Bearcats and ISU had 12 first-half turnovers.

ISU had a couple of chances to cut the lead to under three points, but couldn’t find the big bucket late. In the end, turnovers (18) and poor free-throw shooting (57.1 pct.) doomed the Cyclones.