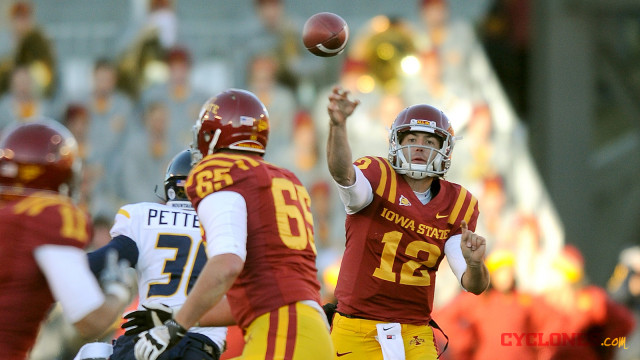 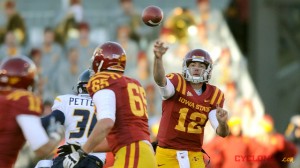 Iowa State (6-6 overall, 3-6 Big 12 Conference) took its first lead (24-23) of the game when junior Edwin Arceo hit a 49-yard field goal with 6:42 remaining.  However, West Virginia (6-5 overall, 3-5 Big 12) All-America honoree Tavon Austin responded on the next play from scrimmage with a 75-yard end-around pass for a touchdown that gave the Mountaineers the decisive score.

Cyclone redshirt freshman quarterback Sam Richardson threw three touchdown passes and rushed for a career-high 119 yards in his first career start.  The Winter Park, Fla. native finished 13-31 for 162 yards through the air with no interceptions.

Senior Josh Lenz led the Cyclone receivers with 48 yards on four receptions and a touchdown.  Redshirt freshman Quenton Bundrage hauled in two catches for 48 yards including a 35-yard touchdown from Richardson.

The Cyclones received the opening kickoff, but a holding penalty proved costly as Iowa State came up one-yard short on third down.  After a Van Der Kamp punt, West Virginia drove to the Cyclone 25 and converted a 42-yard field goal with 9:58 left in the first quarter.

ISU field goal kicker Edwin Arceo had a 47-yard field goal attempt hit the right upright to make his field goal no good. West Virginia responded with a 70-yard, five-play drive over 1:34 that resulted in a one-yard Shawne Alston touchdown rush.  After the point-after attempt was good, the Mountaineers led 10-3 with 10:34 left in the opening half.

Richardson showed great elusiveness on multiple plays in a 10-play 69-yard Iowa State drive that resulted in an eight-yard touchdown pass to Jerome Tiller. The touchdown reception was the first of Tiller’s career.  After an Arceo extra point, the score was 10-7 West Virginia with 7:57 left in the opening half.

West Virginia quickly drove down the field in 3:36 and scored on a six-yard touchdown pass from Smith to Bailey.  With 7:46 left in the first half, the Mountaineers had a 17-7 lead.

Richardson made key plays in a Cyclone drive that started on their 29-yard line with 1:32 left in the first half that resulted in an 18-yard touchdown pass to Lenz.  Iowa State converted the extra point and trailed 17-14.  The score would remain the same at halftime.

West Virginia started the second half with a 15-play, 42-yard drive that resulted in a 44-yard field goal attempt from Tyler Bitancurt that was good. With 7:26 left in the third quarter, West Virginia led 20-14.

Richardson had his third touchdown pass of the game when he hit Bundrage on a career-long 35-yard completion.  The score gave Iowa State the 21-20 edge with 4:44 left in the third quarter.

The Cyclones will wait to learn their postseason fate in the coming days.  Cyclones.com will provide the most-to-date information on the Cyclones’ next game.