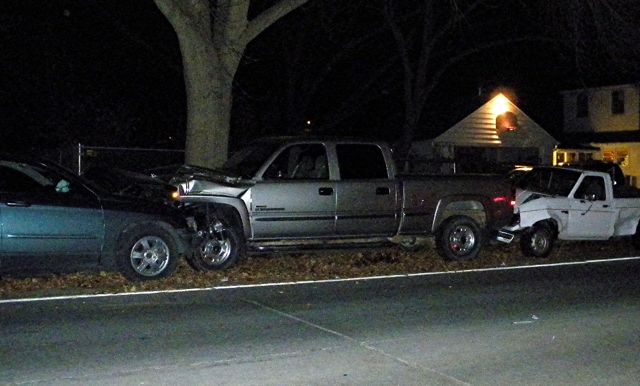 MASON CITY – Early Saturday morning, around 3:30 AM, a hit and run incident was reported to the Mason City Police Department at 14th Street and South Kentucky.

According to Sgt. Dave Houser of the Mason City police Sunday morning, nearby residents heard the collision and thought it was a train and didn’t report it right away. The car that was being driven and initiated the collision is owned by Stacy Crooks of Mason City, and she told police that she lent it to someone else and was not driving and she was unable to tell police who was driving. “Since it’s her car, she is still responsible for the accident,” Sgt. Houser explained. “Not likely to be charges since we don’t know who was driving.”

The police officers were in search of the driver, who, it was reported, took off running after the accident occurred.

At the scene of the accident, the vehicle involved in the hit and run was still in place where it collided, head-on, into a parked pick-up truck on the west side of road, as the vehicle was traveling northbound.  With the domino effect taking place, the truck was struck hard enough to hit another parked truck behind it.

Major damage was done to all vehicles involved.  It was reported that the hit and run vehicle was registered to a woman from Mason City; her name could not be immediately confirmed by police.

The incident was still under investigation.