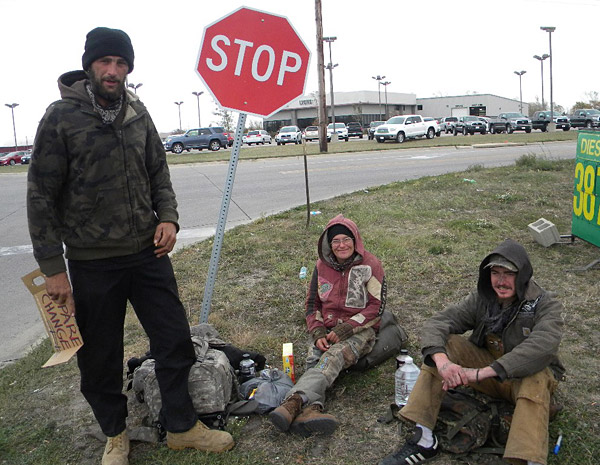 MASON CITY – They missed Hobo Days in Britt, but hobo life goes on for Nomad, Bridge and Jace. Monday afternoon the hobos made a stop in Mason City, near Wal-Mart, on their journey to New Orleans.

Nomad (from South Carolina), Bridge (from New York state) and Jace (from Florida) met up about a month or two ago on the road and have been traveling together ever since.

“We stopped off here to get some canned goods for the road,” said Nomad. “We’re on our way to Little Rock, Arkansas.”

Bridge, who was named that because that’s her favorite place to sleep, said, “It’s warmer there and we’re hoping to see some friends.”

“We would like to make it to New Orleans by Halloween. They have work there around that time,” said Jace. “If we get there too early, the police mess with us.”

They we’re hoping there was a cheap enough motel in town for them to stay, “To catch a shower and sleep in a bed for a spell,” said Nomad. “If not, we’ll being leaving tonight.”

Jace added, “Mason City has been good, average. Every place is different. Some place we don’t make anything and others, we make enough where we don’t have to do this (ask for change) for weeks.”

A Mason City man noticed the 3 hobos hanging around Monday and sent this to NIT: “Three people begging for spare change by Murphy USA in front of Walmart. One of them is sitting on the ground playing with a nice cellphone looks like a smartphone to me. Begging for change, but has enough money for a smartphone.”