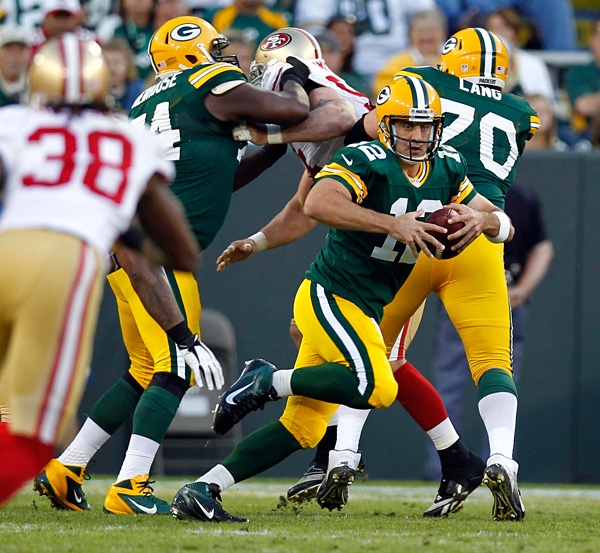 GREEN BAY, Wis. — Hauling a season-opening win out of tradition-laden Lambeau Field proved quite possible and very invigorating Sunday for the 49ers.

Their 30-22, wire-to-wire triumph came in a venue where the 49ers hadn’t won since 1990, and it came against a franchise that went 15-1 last regular season as the reigning Super Bowl champs.

“Knowing that (Green Bay) is the ‘hotshot team’ or the best team in the last couple years, it just makes a huge statement all across the league,” 49ers linebacker NaVorro Bowman said.

That’s as close as the 49ers came to crowing about their breakout win, or “great victory,” as coach Jim Harbaugh termed it.

How intimidating a message is this to the favored Packers and all others who stand in the 49ers’ way of a Feb. 3 date in Super Bowl XLVII? Does it indeed validate the 49ers — last season’s NFC runner-up — as repeat contenders?

“I don’t think we’re ever looking for validation or redemption or anything like that,” defensive lineman Justin Smith said. “We’re moving on to the next game. That one’s even more important than this one.”

The next game: the 49ers’ home opener against the Detroit Lions (1-0) on NBC’s “Sunday Night Football.”

The 49ers never trailed amid Sunday’s sellout crowd of 70,523. They raced to a 10-0 lead and eventually took a 16-7 lead into halftime when David Akers’ kicked a 63-yard field goal, equaling an NFL record shared by Tom Dempsey, Jason Elam and

“This was definitely a once-in-a-lifetime type of deal,” Akers said.

The Packers didn’t go quietly. They scored fourth-quarter touchdowns on a 10-yard pass from Aaron Rodgers to James Jones, and an earlier 75-yard punt return from Randall Cobb.

That later touchdown served as the centerpiece of a busy and suspect day by the league’s replacement officials, who enforced 18 penalties but opted to erase an illegal-block call on Cobb’s return.

“We had a few mistakes, but some of the penalties were definitely a little bizarre,” Rodgers said.

The 49ers could finally exhale in the final minute, once cornerback Chris Culliver batted away a 30-yard, fourth-down pass to Jordy Nelson at the 49ers’ 15-yard line.

“I saw Aaron Rodgers give Jordy Nelson a couple signals, and I knew he was coming at me,” Culliver said. “I just had to play tight.”

Rodgers, a Cal product and the reigning league MVP, finished 30-of-44 for 303 yards with two touchdown and one interception.

Rodgers got sacked three times, and the final one came from Ahmad Brooks to help thwart that final drive. Brooks credited defensive coordinator Vic Fangio for that sack, saying it came on a call they hadn’t used all game and only after previous calls set up that play.

“That last (Packers) drive, it was tough, it was scary,” 49ers running back Frank Gore said. “I know watching over the years how they get down field fast. Our defense stepped up when it had to.”

Rodgers’ biggest mistake came earlier in the fourth quarter, when Bowman intercepted a pass at the Packers’ 34-yard line and returned that turnover 11 yards.

“He didn’t expect me to be there so he didn’t throw it too hard,” Bowman said. “I baited him into it. … I was able to bite (on a run fake) and get back in that window when I snagged it.”

Rodgers’ 93.3 passer rating was trumped by the 49ers’ Alex Smith, who had a 125.6 rating by going 20-of-26 for 211 yards with two touchdowns. Smith surpassed Steve Young’s 49ers record for the longest stretch without an interception (185 consecutive passes, dating back to 159 from the end of last season).

Sandwiched between Akers’ first two field goals was Randy Moss’ first touchdown catch since 2010. Smith’s 14-yard scoring pass to Moss put the 49ers ahead 10-0 with 11:10 left in the first half.

Despite Moss and Mario Manningham’s welcomed addition to the receiving corps, the 49ers’ offense remains very reliant on Gore, and he came through with 112 yards on 16 carries.

“We fought to the end,” Gore said, “and our defense made big plays when they had to.”

The Packers gained only 45 yards rushing, as Rodgers had five carries for 27 yards and Cedric Benson nine for 18 against the league’s top rushing defense last season.

The 49ers’ only other touchdown came on a 4-yard, third-quarter pass from Smith to Vernon Davis, who’s scored a touchdown in each of his four meetings against the Packers.

As was the case last season, Akers remained a terrific alternative when the 49ers couldn’t find the end zone. Akers’ 63-yard blast bounced off the crossbar and fell over it with what he called “a sweet bounce” as the first half expired.

“We still have a lot of work to do,” Bowman said, “but this is definitely a great start for us.”