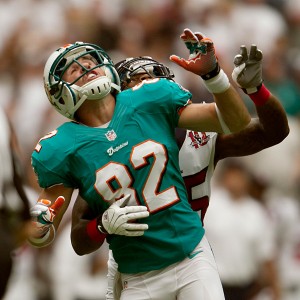 HOUSTON — For months, Ryan Tannehill has been peppered with questions about how he would handle the speed of an NFL game.

In the span of seven catastrophic minutes Sunday, Tannehill — the hope of a franchise and its long-suffering fan base — learned just how fast a game can slip away, particularly if you are careless with the football.

In Tannehill’s much-celebrated debut, the Dolphins rookie quarterback didn’t live up to the hype, throwing three second-quarter interceptions in a 30-10 season-opening loss to the Houston Texans.

In all, the Dolphins turned the ball over four times in the final 7:35 of the first half, a bevy of body blows that swung a three-point Miami lead into a three-touchdown deficit.

“It seemed like everything is going wrong that could possibly go wrong,” said Tannehill, who completed 20 of 36 passes for 219 yards but did not lead the Dolphins on a touchdown drive.

7:35 left in second quarter (with the Dolphins leading 3-0): Tannehill, making probably his worst of his three-dozen throws, locked in on receiver Legedu Naanee in Houston territory. Corner Johnathan Joseph jumped the slant route and made the pick, setting up a 35-yard Shayne Graham field goal.

4:06 left (Dolphins 3, Texans 3): Tannehill appeared to steady himself, moving the Dolphins from their 17 to the Houston 44. Then on third-and-long, he again targeted Naanee, but J.J. Watt’s mitts got in the way. Watt deflected the pass, Brian Cushing picked it, and seven plays later, the Texans were in the end zone, courtesy of a 14-yard run by Arian Foster.

1:44 left (Texans 10, Dolphins 3): Talk about deja vu. On Tannehill’s very next pass, Watt again redirected the effort, with Kareem Jackson the lucky recipient of a gift interception. Foster would hit paydirt again, this time from 2 yards out.

0:43 left (Texans 17, Dolphins 3): The Dolphins couldn’t even run out the clock without botching things. Daniel Thomas coughed up the ball on a big hit by Glover Quin. Matt Schaub then connected with Andre Johnson on a 14-yard touchdown pass, and the rout was on before halftime.

During their meltdown, the Dolphins turned the ball over on three consecutive offensive snaps, which is no easy feat. With Houston’s potent offense clicking and the 71,566 white-clad Houston partisans smelling blood, Dolphins coach Joe Philbin all but admitted there was little he could do to stop the snowball from rolling down the mountain.

“Um, (get to) halftime?” he joked. “Obviously, guys have to step up and make a play. Unfortunately, they did and we didn’t. There’s no magic formula.”

And to think, Philbin’s reign had started out so promising. Miami dictated the pace of the game at the outset, and Dan Carpenter gave the Dolphins an early lead with a 39-yard field goal. Meanwhile, the Dolphins defense held Houston scoreless in the first quarter.

When the game was still close, the Dolphins gave a glimpse of what they believe is their formula for success: safe passes from Tannehill and lots of Reggie Bush. Through the first 15 minutes, the Dolphins called more runs (nine) than pass plays (seven). Yet they would run the ball just 10 more times the rest of the game. Not coincidentally, their efficiency plummeted.

Meanwhile, the Texans offense — particularly its passing game — was lights out. Johnson, a Miami native, torched the Dolphins secondary for eight catches for 119 yards and a touchdown. Schaub had 266 yards passing, while Foster added 79 yards on the ground.

In all, the Texans outgained the Dolphins 337-275. Houston controlled the ball for nearly 10 more minutes than Miami. The Dolphins had just three offensive snaps in the entire third quarter. Miami converted just 2 of 10 third downs, and Naanee, a starting wideout, went without a catch. Tannehill had at least four passes batted at the line.

But that wasn’t nearly enough to make up for their comedy of errors. The final score would have been even more lopsided if not for Marcus Thigpen, who in the third quarter brought back a punt 72 yards for a touchdown.

It was the Dolphins’ first punt return for a score since 2007.

But all that did was put Miami’s overworked defense back on the field. Beginning with Tannehill’s first interception, the Texans scored on six of seven possessions, which ensured the Dolphins an eighth loss in their past 11 road openers.

“We unraveled a bit in the last (seven) minutes of the half, but that’s on me,” Philbin said. “We’ve got to do a better job there.”