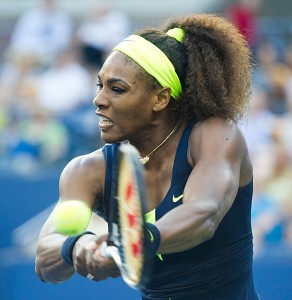 NEW YORK — Although her serve let her down, her nerve never did.

Serena Williams, playing from behind in the final set, hit soaring lobs and 125-mph aces and somehow scrambled to a 6-2, 2-6, 7-5 win over top-seeded and world No. 1 Victoria Azarenka on Sunday in front of 23,771 fans in Arthur Ashe Stadium to win the U.S. Open women’s singles title.

It was Williams’ 15th Grand Slam tournament title and her fourth U.S. Open championship, and it seemed redemptive.

“Nothing is more exciting than winning such a tight match in a Grand Slam final,” Williams said.

After the last point of the 2-hour 18-minute match, Williams dropped to the court and bellowed. The sound was a grand combination of happiness and relief.

In 2009 Williams had left here after she directed an angry tirade at a lineswoman who called her for a foot fault on the second-to-last point of a semifinal loss to Kim Clijsters.

After missing the 2010 tournament because of injuries, Williams collapsed in the second set of the 2011 final against Samantha Stosur after she had hit a winning forehand and, before the ball landed, yelled in joy. The umpire took a point away from Williams because the scream was considered a hindrance.

Against Azarenka, who makes shrieking sounds on nearly every ball she hits, Williams stayed polite. She gave only a little glare to a linesman who called her for a foot fault.

“This is the first year in a long time I haven’t lost my cool,” Williams said. “I think everyone thought about last year. That’s never on my mind because I was just focused. I was just thinking, ‘OK, which foot was it?’ So I would know not to do that again.”

But when Azarenka, a 23-year-old from Belarus, saved a break point and held serve for a 5-3 lead in the final set, it seemed as if Williams would leave the U.S. Open an unhappy loser again.

“I honestly prepared my runner-up speech,” Williams said. It was a speech she didn’t need.

Williams, who turns 31 on Sept. 26, won the final four games of the match. She did it by staying positive. “If I could just force another game,” she said. “And obviously I never give up. I never, never quit.”

Azarenka was both devastated and reflective about the loss.

“I have no regrets,” she said. “I felt like I gave it all. It really, really hurts. It was a great match. It was close. But not for me.”

Williams’ serve may not have been at its best — only 54 percent of her first serves went in and she double faulted five times — but she said she did something else special Sunday.

“I think I competed really well,” said Williams, who did serve 13 aces, to none for Azarenka. “I never stopped competing, no matter what. I think sometimes if you can just go out and compete, then you do well.”

There hadn’t been a three-set women’s final in New York since 1995.

“It was such a great experience,” said Williams, who before Sunday hadn’t lost a set in six matches at this Open. But, she said, she prefers winning with less drama.

“This is better … as long as you’re on the winning side,” Williams said. “It’s not good if you’re on the losing side. Obviously I would have wanted to win easy.”

Azarenka had been 12-0 in three-set matches in 2012 but Williams had come into this final with a 9-1 career record against the Belarusian, winning the previous seven meetings.