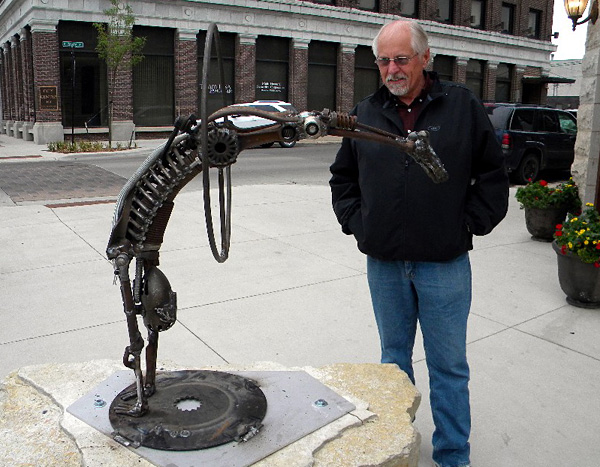 MASON CITY – Bronze Sculpture Artist, Felix Velez, was downtown in the Commerce Center explaining his “Gymnastic Force” sculpture that will be added in a couple weeks by the public transit bus stop.

“They are going to wait to get a taller pedestal for it to sit on, to prevent any vandalism,” said Velez. “They chose the sculpture to go with the theme, “Movement.”

Jacque Frazee is the artist of “Jumping Through Hoops” that stands outside Moorman Clothiers.

“I was an art major in college 25 years ago, but I haven’t done much with it until 2 years ago,” said Frazee. “I’m usually not very happy with most of my sculptures, an Artist is his own biggest critic, but I’m happy with this one.”

Dave Frenz, an admirer of the new sculptures was looking at it and said, “It is different, interesting.”

Scott Moorman said he was very happy with the sculpture that was outside his store. “It draws people to it, it’s different and makes you want to figure it out.”

The sculpture, “Bottoms Up”, was originally named, The Plunge. The artist changed the name when it was known that it would be sitting outside of The Brewery on East State Street.

There was another one that was said to be going to go up later today.

The sculpture that sits closest to the north entry way of Southbridge Mall is a scene of an old fisherman, telling fishing stories of a fish that was “this big” to a younger girl and boy, who is holding a Walleye up for all to see. The artist wasn’t around to get the official name.