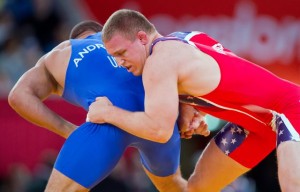 LONDON — Jake Varner learned to wrestle in Bakersfield. From his father, Steve. From his cousin, Andy, who coached Jake to two California high school state championships and who still coaches at Bakersfield High.

“It’s in my blood,” said Varner, who now has something Steve and Andy don’t have.

(PHOTO: Jacob Varner of the United States, right, battled during his gold medal victory in a 1-0, 1-0 match against Ukraine’s Valerii Andriitsev, left, in the mens’ 96kg freestyle final at the ExCeL centre during the 2012 Summer Olympic Games in London, England, Sunday, August 12, 2012.)

And maybe not coincidentally, this is the first Olympics where medalists get an extra cash prize from a foundation called “Living the Dream Medal Fund,” that was established in 2009 and offers Olympic wrestling gold medalists $250,000.

“It’s not about the money,” Varner said. “It’s about the pride.”

If his love of the sport came from his family, Varner took himself east to find the best finishing schools. He trains under 2004 Olympic gold medalist Cael Sanderson at the Nittany Lion Wrestling Club in State College, Pa. Before that he wrestled for Sanderson at Iowa State, where Varner was a two-time NCAA champion.

“I’m not sure I’m in Cael’s league,” Varner said, “but it’s awesome to be coached by a guy like that. I owe him a lot. It means a lot to have him here with me.”

Sanderson left Iowa State for Penn State while Varner was still in college. Varner that he was so dedicated to Sanderson that the moment he graduated from Iowa State, he got in a car and drove 15 hours straight to Pennsylvania so he could begin training for Sanderson again.

It was Sanderson, Varner said, who “pounded on me and pounded on me,” during training sessions in the months leading to the Olympics.

“He said he was going to get me to my ultimate goal, which is this gold medal, and that’s what he did,” Varner said.

When he was in high school, Varner once pinned all six of his opponents in the state tournament, the only wrestler in California history to be so dominant.

Varner had advanced to the gold-medal match by coming from behind in the semifinals to beat 2008 Olympic bronze medalist George Gogshelidze of Georgia earlier Sunday.

It had been expected that Varner would wrestle 2011 world champion Reza Yazdani of Iran in the gold-medal match, but Yazdani had to be taken off the mat in a wheelchair after suffering a leg injury during his semifinal against Andriitsev.

Varner had lost to Yazdani as recently as May in a World Cup meet, but he had never wrestled Andriitsev, a former junior world champion.

Sanderson said one of Varner’s winning traits is that he doesn’t get too high or too low and that it doesn’t matter whom he wrestles.

“That’s one of the reasons he’s do good,” Sanderson said. “He has great composure. He’s the man.”

The man with a medal. And the cash.