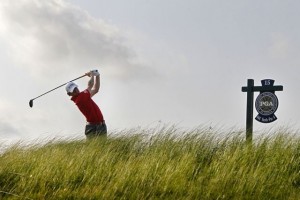 KIAWAH ISLAND, S.C. — Maybe it’s premature to reserve his place on golf’s Mt. Rushmore, but man, Rory McIlroy took a giant step in that direction Sunday at the Ocean Course.

Only time and performance will tell if he merits a place among the game’s greats, but keep the stone mason on call after McIlroy’s dominance during the weekend. He put on a show that reminded — dare we say this? — of the youthful Tiger Woods in blowing away the field to capture his second major championship, this one the 94th PGA, three months after his 23rd birthday.

Consider: At McIlroy’s age, Jack Nicklaus’ credentials included two of his record 18 majors and Woods owned one his 14.

“At this stage, people could be saying I was right when I was saying Rory could challenge Jack,” three-time major champion Padraig Harrington said.

The Northern Irishman put the finishing touches on his weather-delayed third-round Sunday morning, posting a 5-five-under par 67 that left him with a three-stroke advantage. Then, in the afternoon, with the winds calm and birdies plentiful, he left the field in the dust.

In adding a PGA title to his 2011 U.S. Open, McIlroy threw a read-’em-and-weep 3-under-par 33 at the rivals on the front nine, finished his fourth journey around the Ocean Course with a bogey-free 66 and never saw his lead shrink to fewer than two strokes. His 13-under 275 topped runner-up David Lynn by eight strokes. He is boosted to No. 1 in the world and no one who watched his weekend play would question the rankings.

Rivals could only hope for a repeat of his back-nine debacle at the 2011 Masters; instead he played more like the player who routed the Open competition two months later.

“I think what happened at Augusta will stand me in great stead this afternoon,” he said after Sunday morning’s round.

He proved prophetic. His nearest rival, Carl Pettersson, suffered a crippling two-shot penalty on the opening hole. Pettersson hung tough for a while and otherwise only Ian Poulter really joined the chase.

Poulter started with five consecutive birdies, but he had started too far back and spit the bit with three consecutive back-nine birdies that made McIlroy’s march to the winner’s circle a one-car parade.

“Phenomenal,” Pettersson said in summing up McIlroy’s performance. “He drives it long, straight, hits his irons great and he chipped and putted awesome today. . . .You know, he was just better than everybody.”

The key, McIlroy said, came in Friday’s second round. Winds that gusted to 35 mph made every shot an adventure, and he stood 4 over par for the round after 13 holes. He birdied the tough par-3 14th and got home in 75 in a round that, he said, “could have been 77 or 78.”

Woods, who had talked optimistically about the chances of earning his 15th major title at the Ocean Course, saw his trend of failing off on the weekend continue. He shared the halfway lead in the U.S. Open and dropped to 21st. In the British Open, he slipped from contention with a final-round triple-bogey. Then, after sharing the 36-hole lead here, he tied for 11th, 11 strokes off the pace.

“He’s very good,” Wood said in saluting the champion. “We all know the talent he has. He went through a little spell this year, and I think that was good for him. We all go through those spells in our careers.

“He’s got all the talent in the world to do what he’s doing. This is the way Rory can play. When he gets it going, it’s pretty impressive to watch.”

Harrington, who said he believes Woods will break Nicklaus’ record for major titles, paid McIlroy quite a compliment, saying: “Rory is proving that when he plays well, he plays like Tiger played well.”

“For a few years, if Tiger brought his A game, the rest of us struggled to compete,” Harrington said. “Rory is showing with his A game, everybody else is going to struggle to compete with him.”

Winning the year’s final major ends a tumultuous season of McIlroy, who went into a tailspin and missed four cuts in five events after winning the Honda Classic in March. Critics suggested that his romance with tennis star Caroline Wozniacki had hurt his game.

He answered those critics in the best possible way this weekend.

Asked what part of his game could have been better, McIlroy said, “Nothing.”