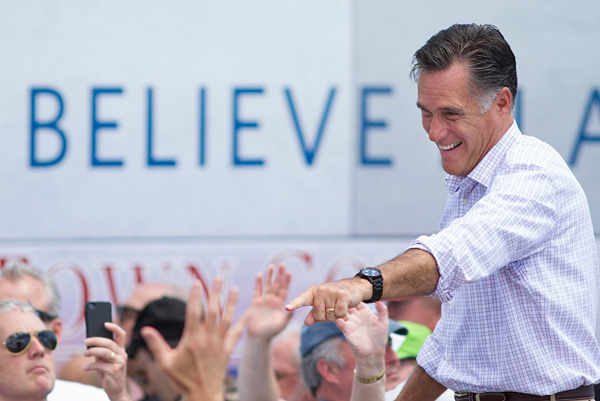 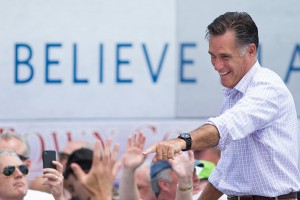 STRATHAM, N.H. — Mitt Romney plunged into Obama country Friday as he began a six-state bus tour telling voters that if he becomes president, “the era of big government will really be over.”

The presumptive Republican presidential nominee was echoing President Bill Clinton’s 1996 State of the Union pledge. Crowds cheered at Romney’s two stops, one at the Scamman farm in Stratham and another in Milford.

(PHOTO: Republican presidential candidate Mitt Romney points to a supporter after his speech at Scamman Farm in Stratham, New Hampshire on Friday, June 15, 2012.)

Romney is aiming to use this tour, which will visit states Barack Obama won in 2008, for face-to-face campaigning in all-American settings. In Stratham, he spoke and mingled on a farm’s hilltop among Boy Scouts, bales of hay and a barn with an “Every Town Counts” sign draped across the roof. People at the Milford Oval were served ice cream — chocolate, vanilla or chocolate chip.

Yet the tour’s first day was hardly the kind of old-fashioned whistle stop of American lore. The farm is a 300-acre spread from which no small town can be seen, and is run by a former New Hampshire House speaker. The only other stop was in Milford, where folks gathered in the midday sun and listened to a Dixieland band play “Yankee Doodle Dandy” as Romney arrived. Romney offered his vision again, and then campaign officials boarded a plane and headed for Pennsylvania, site of three Saturday events.

Asked how a farm run by a prominent Republican insider offered the kind of message Romney was promoting, senior strategist Russ Schriefer replied, “Farms usually are in small towns.”

The tour had another insider touch: A possible audition for Romney’s eventual vice presidential pick. He was introduced by Sen. Kelly Ayotte, R-N.H., and accompanied by former Minnesota Gov. Tim Pawlenty. When he heads for Ohio, Sen. Rob Portman, R-Ohio, may join Romney, and in Wisconsin, House Budget Committee Chairman Paul Ryan, R-Wis., could make an appearance.

In Stratham, Romney was returning to the farm where he launched his campaign a year ago. His “Believe in America” bus pulled up to the podium, and out stepped Romney and his wife, Ann. As Kid Rock’s “Born Free” blared, people in the crowd of about 500 waved little American flags. Romney, wearing a white shirt and khakis, clasped hands with supporters, and he quickly tried to get lofty.

“Everywhere I go, I meet people who represent the best of America. They are hopeful, hard-working, determined and proud. But they are also worried and anxious. They are tired of being tired. And they are tired of a detached and distant president who never seems to hear their voices,” he said.

Romney has been offering a sharper contrast to Obama and harsher rhetoric in recent days, and he kept up the heat Friday.

“When Americans rose up and demanded, ‘Stop borrowing money and sticking our kids with the bill,’ the president wasn’t listening. He was on the line with China, taking out another loan,” Romney charged. “When Americans went to town halls and said, ‘We don’t want Obamacare,’ the president ignored us, and spent 15 months ramming his health care bill through Congress on a party-line vote.”

He talked about the disconnect between Americans and Washington. “The federal establishment has never seemed so hostile or remote — so disconnected from economic reality, and yet so willing to use restrictions and regulations, taxes and fines, commissions and czars to direct our daily lives,” he said.

The crowd loved it — no surprise, since Romney has long been popular in this state, where he has a home. He governed neighboring Massachusetts from 2003 to 2007.

Romney won January’s Republican primary, though he fell well short of 50 percent. Supporters insisted Friday that Republicans are firmly behind him now.

“Why Romney? Because we don’t like Obama,” said Paul Fidler, a truck driver, after Romney spoke in Stratham. “We’re petrified about what’s going on,” said Suzanne Rufiange, a bookkeeper, as she ate vanilla ice cream in Milford. “There’s too much control by a small amount of people.”

“Finally,” said Tim Eifler, a retired college English professor from Atkinson, “we can elect somebody who really knows what’s going on with the economy.”

Romney told the crowd, which came in the dozens of cars spread all over the big farm, that “Washington’s big government agenda should not smother small-town dreams.”

Romney’s campaign is convinced that as long as they stick to their Obama-has-ruined-the-economy theme, they’ll do well.