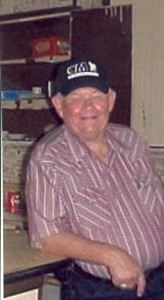 A memorial service will be held at 1:00 pm today with a one-hour prior visitation at Fullerton Funeral Home, 123 2nd St. S.E., Mason City. Reverend Ross Erickson will be officiating. Online condolences may be left at fullertonfh.com.

Harvey was born on July, 24, 1930 to parents Otto and Adelheit Haag in Kreutzberg, Texas.  He grew up in Texas, and then joined the Navy in November of 1952.  While in the Navy he attained his G.E.D.  Harvey served in the Korean War.  After four years of service, at age 26, he decided to move to Mason City, IA to farm and marry his wife Audrey.  Harvey and Audrey were united in marriage on October, 23, 1956 at The Little Brown Church in Nashua, IA.  To this union two children were born, Raymond and Linda.

Harvey and Audrey made a life together in the surrounding area of Mason City.  He was a hard-worker and farmed for most of his life as a full-time job, but also worked several part time jobs through-out his life as a mechanic, elevator employee, and truck driver.  He was also a member of the V.F.W., German Armer Club, and I.W.O.F. Lodge. He was the type of person who could hold a conversation with anyone.  Harvey liked wintering in Texas, playing cards or dominos, working on motors, and he loved spending time with his family and friends.

He was preceded in death by his parents and brother, Albert Haag.