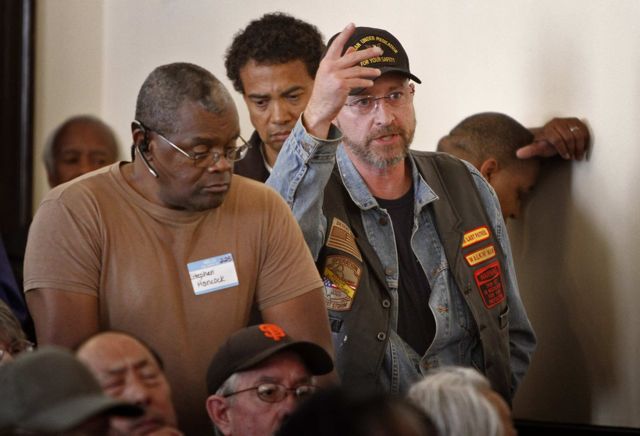 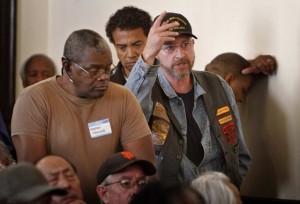 SAN FRANCISCO — Horatius A. Carney spent seven weeks in a military hospital after injuring his knee while in the segregated Army Air Forces. He first filed a disability claim in 1947. He is still waiting for a response.

Lisa Scott, an Army communications specialist who served in Saudi Arabia during Desert Storm and Desert Shield, waited seven years for the Veterans Benefits Administration to approve her disability claim for post-traumatic stress disorder and depression.

(PHOTO: Desert Storm vet Dean Lundholm makes his frustration known at the meeting in the Veterans War Memorial Building in San Francisco, California on May 21, 2012.)

Ari Sonnenberg served three tours in Iraq and came home with a traumatic brain injury, PTSD and internal injuries. “Haunting memories of the horrors of war” drove him to attempt suicide, he said, and he called the office of Rep. Jackie Speier, D-Calif., for help navigating the veterans benefits system.

On Monday, Sonnenberg left the Palo Alto Veterans Affairs hospital so that he could testify during a heart-wrenching forum attended by more than 200 veterans seeking to expedite stalled and bungled disability claims. For more than three hours they vented about a system that they said actually makes their lives worse.

The main target of the frustrated, often tearful, men and women was the Oakland office of the Department of Veterans Affairs — which serves an area from Kern County north to the Oregon border; it has the second-largest case backlog of any regional office in the country, behind Seattle.

“I’d like to use this opportunity to express to the VA benefits section how the unnecessary delay and loss of documents and mishandling of information caused added stress and anxiety to my already difficult life,” Sonnenberg, pale and shaking, told the packed hearing room. If not for Speier, “I would still be floating around the system.”

On average, veterans whose disability claims are processed in Oakland wait 320 days to find out whether they will receive assistance, compared with 241 days at the nation’s 56 other VA offices, according to Speier’s office. As of Monday, there were 829,866 cases pending across the country — 66.5 percent had been active for more than 125 days.

Nearly 40 percent of all disability claims reviewed during an audit of the Oakland office released this month were incorrectly processed; nearly 60 percent of the traumatic brain injury cases reviewed were bungled. Around 34,000 cases in the office’s files remain unresolved.

The backlog is so severe that new claims from Northern and Central California veterans are being sent to VA offices in Nebraska and Oklahoma, according to Speier, who convened Monday’s forum along with Rep. Barbara Lee, D-Calif.

“There is an untenable backlog at the VA Oakland office, and we are here today to address it,” Speier told the crowd, which spilled out of the hearing room in San Francisco’s ornate Veterans War Memorial Building.

“Everyone agrees that we must improve the delivery of services out of the Oakland VA,” she said. “We know the history, the audit results, the data, all of which are damning.”

The assembled veterans from World War II, Vietnam, the Gulf War, Afghanistan and Iraq — some clutching canes and wearing hearing aids (the oldest was 93) — cheered Speier’s declaration that the Oakland office would be fixed. In the meantime, a cadre of VA claims workers had set up shop in the next room to assist more than 180 veterans who pre-registered for fix-it sessions.

But the crowd was far less welcoming to VA Western Regional Director Willie Clark, who alternately apologized for and defended his beleaguered agency during hours of painful testimony about injuries and depression, lost paperwork, denied claims and medical exams ordered by the VA, only to be rendered useless by agency foot-dragging.

When the VA audited the Oakland office in January, the agency’s goal was 92 percent accuracy in processing claims. But Oakland was only 80 percent accurate when it came to making “compensation rating-related decisions,” according to the report. Thousands of dollars in disability payments hinge on the ratings, or the VA’s assessment of just how disabled a veteran is.

The error rates, Clark said, were “not indicative of the total work the office is doing. … Oakland’s accuracy rate is 86 percent.”

When Clark stated his agency’s goal for 2015 — “no claim pending over 125 days with a 98 percent accuracy rate” — the restive crowd shouted him down.

“Three years from now?” came an incredulous cry from the audience.

Carney is now 84. As a World War II-era corporal, he served as a surveyor and heavy-equipment operator, injuring his knee on the Aleutian island of Attu. He filed a disability claim on Sept. 17, 1947, around the time he was discharged.

“I’ve since been told that they could find no record of my injury or hospitalization,” said the retired Oakland bus and truck driver, who did not pursue the claim at the time. “We figured segregation was still going on, and they weren’t going to do anything about it. So, I figured, the heck with it.”

The injury, he said, ended a promising athletic career. After leaving the military, Carney went back to college, hoping to become a minister or a teacher. But because of his injury, he couldn’t stand for any length of time.

Nearly a year ago, he decided to file his claim again. Since then, he’s received three letters from the VA, but no decision — and no help. On Monday, he was cordial but impatient.