Twins roughed up by Yankees 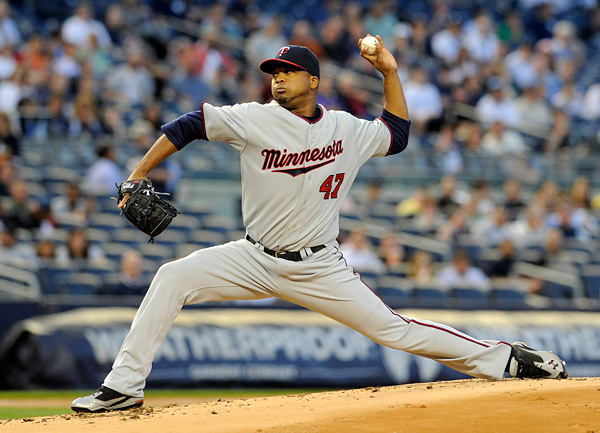 NEW YORK — From baseball stadiums in the Bronx to operating tables in Manhattan, Tuesday was a bad night for the Twins.

They learned before the game that righthander Scott Baker needed more extensive surgery than initially believed. Then they were ejected while being rejected, 8-3, by the Yankees as lefthander Francisco Liriano let them down once again.

The Twins fell to 3-8 on the young season. Josh Willingham ran his season-opening hitting streak to 11 games with a solo home run in the second — his American League-leading fifth homer this season — and the Twins led 3-1 in third before the Yankees got to Liriano.

Liriano was knocked out in the third inning after 11 Yankees reached base on his watch. He fell behind hitters again and had a tough time figuring out Greg Gibson’s strike zone.

He wasn’t the only one.

With a runner on second in the third inning, Denard Span took a called strike and appeared to begin bantering with Gibson. He appeared to continue to speak as he stepped back in the batter’s box, and that’s when Gibson ejected him from the ballgame. It was Span’s third ejection of his career, and Span didn’t leave the field before having more words with Gibson as manager Ron Gardenhire and third base coach Steve Liddle tried to step in.

Gardenhire picked up where Span left off, and soon was tossed for the 61st time in his career.

Clete Thomas replaced Span at the plate and doubled over Brett Gardner’s head in left that drove in Alexi Casilla to give the Twins a 2-1 lead.

Jamey Carroll followed with a RBI single, and the Twins led 3-1. At Yankee Stadium. Against old nemesis CC Sabathia.

But Liriano had already danced out of trouble. He stranded two runners on in the first inning. In the second, he had given up a RBI ground-rule double to Brett Gardner, loaded the bases and got Robinson Cano to ground out to end the inning. He was playing with fire with a dangerous lineup that is comfortable playing from behind.

Alex Rodriguez lined out to open the third. He was the last batter Liriano retired. Abraham Nunez drove in a run with an infield single and Chris Stewart added a two-run single to give New York a 4-3 lead and send Liriano to the showers. Derek Jeter’s sacrifice fly closed the ugly-looking book on Liriano’s night: 2 innings, seven hits, five earned runs, four walks and two strikeouts.

Liriano has given up five earned runs in all three of his outings this season, the outing on Tuesday easily was his shortest. At 0-3 with a 11.91 ERA, Liriano might be the most disappointing Twins player during this opening stretch of the season. He was expected to be one of the keys of the rotation. When Baker went down with elbow problems — he went in for flexor tendon surgery on Tuesday but ended up having Tommy John surgery — the Twins needed him more than ever.

But all the good pitching he did during spring training must be locked in a trunk in Fort Myers.

Up 5-3, the Yankees were never threatened again, adding runs in the fourth, fifth and seventh innings to pad their lead.

2 Responses to Twins roughed up by Yankees