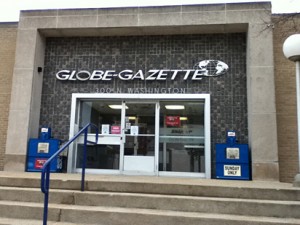 MASON CITY – Lee Enterprises Inc., owner of the Globe Gazette in Mason City and other newspapers, reported a 54 cent per share loss ($26.6 million) for its latest quarter. Lee attributed the loss to costs associated with its emergence from bankruptcy. For the same quarter last year, Lee reported a loss of just 3 cents per share.

– Compensation decreased 5.5%, with the average number of full-time employees down 7.4%

– Newsprint and ink expense decreased 8.5% as a result of a reduction in newsprint volume of 7.6%

In other Lee news, it was reported by the Wall Street Journal last week that Warren Buffett had bought a stake in the company last November, buying $85 million of Lee debt from Goldman Sachs Group. Buffet’s company, Berkshire Hathaway Inc. reportedly paid 65 cents on the dollar on the debt.

The St. Louis Post-Dispatch, Lee’s largest paper, reported that Lee owed about $965 million as of January, 2012.

3 Responses to Lee, owner of Globe Gazette, reports another loss