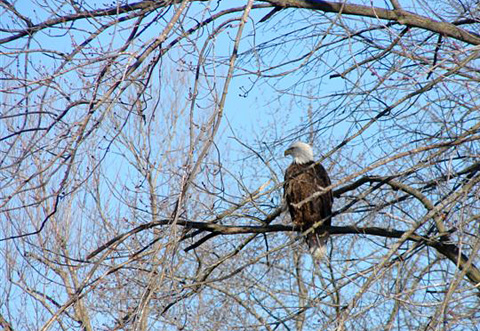 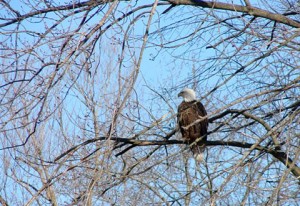 MASON CITY – The eagle’s nest that was in southeast Mason City is gone.

We wrote a story about this nest in February, thanks to the help of local fisherman Jerry Anderson.

The nest was located along the east side of the Winnebago River on South Birch Drive, just past the Humane Society and animal shelter buildings.

Anderson let NIT know Wednesday that the nest had blown down.  Checking the area this afternoon, it appears he is right; there is no trace of the nest nor the two eagles that occupied it.

“Must have happened in the last couple of days, with all the wind we had,” Anderson said.  He is a regular fisherman on the Winnebago near the spot the eagles had chosen for their nest.

Anderson (shown below, pointing out the nest back in February) had provided NIT with a few really nice photos of the birds.  It appeared that there was a male and a female and that they had eggs they were trying to protect.

Later Wednesday, Anderson said he went out again this afternoon and he said the eagles “were back just hanging around, not sitting on the nest.”

He says there is now a very small nest near the same spot.

“The nest is just itty bitty, but when I was down there one of them flew in and then the other one.  One (the female) is just looking towards the leftover nest and the other one (the male) is licking his wounds because of the tongue-lashing he has got since the majority of the nest has fallen. Poor guy!”

Hopefully, the birds are OK and can start fresh. 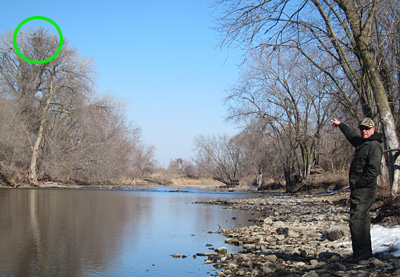 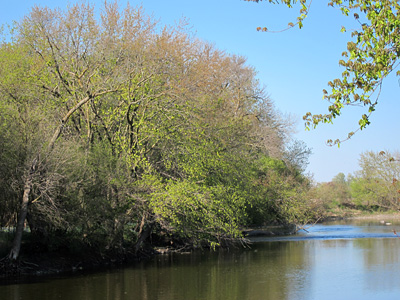