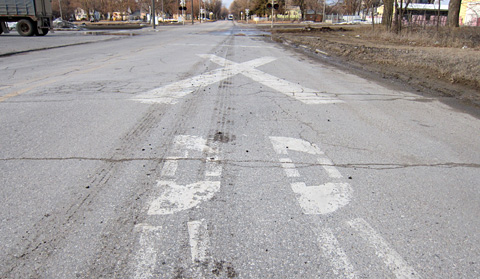 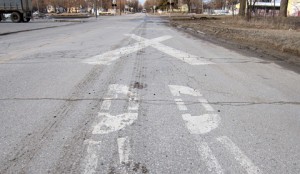 MASON CITY – As the City of Mason City continues to downsize its staff and handle fewer maintenance jobs around the city than in past years, dollars are increasingly flowing out of the city.

For example, pavement marking and painting was a job that was once done by city employees, at a minimal cost.  Supplies were bought here in Mason City, a couple of workers did the job during the warm, dry days. Road Use Tax Funds, which typically cover the cost, were minimized for this project and likely spent elsewhere in upkeep of the roads.  The city got more accomplished with those dollars just by having trained staff and some equipment ready to go.  Stencils were made by city employees, and they carried a small paint machine around from site to site.

Since this work was “outsourced” to private companies, typically not from Mason City, the cost has went up and the dollars now flow out of Mason City.  Instead of those supplies being bought in the city, and workers from Mason City making a wage, the dollars have been paid to a company from Gilbert, Iowa, who has won the job bid the last three years:

The trend of outsourcing city work to private companies is being accelerated by Mason City Mayor Eric Bookmeyer and some city council members like Travis Hickey.  Their next target will be privatizing the city-run trash hauling service.

Privatizing all the work and services the city once provided makes for less work and fewer headaches for city leaders (less employees to manage and delegate work to) but does it save the city money?  Judging from the pavement painting project, no.

UPDATE: After a google search and one click, equipment was found that can do almost all the pavement line painting in the city. Line painting concrete stripers run from $635 to $2995, and claim to be low maintenance and easy to operate.