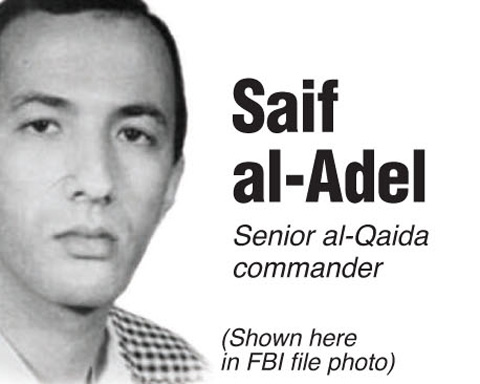 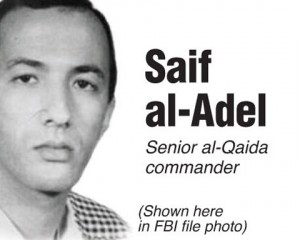 CAIRO — A senior al-Qaida leader wanted for the 1998 U.S. embassy bombings in Africa was arrested at the Cairo International Airport on Wednesday, after arriving on a flight from Pakistan, according to Egyptian security officials.

Mohammed Ibrahim Makkawi, once a confidant of Osama bin Laden, allegedly plotted the near-simultaneous attacks on U.S. embassies in Tanzania and Kenya that left more than 200 people dead. A militant Islamist for decades, Makkawi is linked to the Sept. 11, 2001 attacks and the 1981 assassination of Egyptian President Anwar Sadat following Cairo’s peace treaty with Israel.

Makkawi, a former Egyptian army officer, has often been described as a military and intelligence strategist and one-time chief of bin Laden’s security detail. He’s known by the alias Saif al-Adel, which in Arabic means the “sword of justice.”

He’s written terrorist manuals, including one reportedly called, “The Base of the Vanguard,” and trained militants in Egypt, Afghanistan, Pakistan, Somalia and Sudan.

“Al-Adel is thought to be affiliated with the Egyptian Islamic Jihad (EIJ), and is believed to be a high-ranking member of the Al-Qaeda organization,” according to a wanted poster issued by the Federal Bureau of Investigation. The U.S. has offered a $5 million reward for his capture in connection with the African bombings.

The wanted poster gives few other details about Al-Adel, listing his height, weight and build as unknown, and his birth date between 1960 and 1963.

The Associated Press has reported that the man arrested claims he’s not the Makkawi wanted by the U.S. and is a case of mistaken identity.

“Speaking to reporters at the airport, Makkawi said he was not the senior Al Qaida leader known as Saif al-Adel and that he had nothing to do with the terror group since 1989,” stated the news agency.

The official Egyptian news agency, MENA, reported that the Makkawi authorities have in custody is the terrorist leader. MENA quoted officials as saying that Makkawi had intended to turn himself in after decades on the run.