Protests over Quran burnings lead to seven deaths in Afghanistan 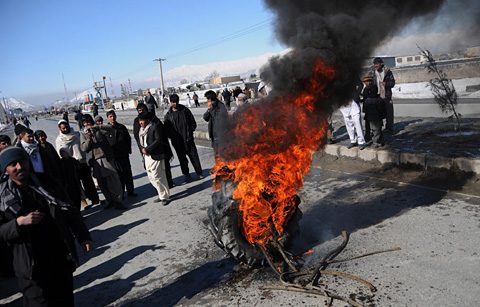 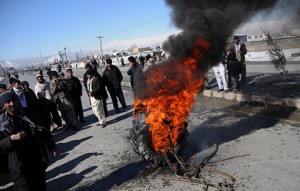 KABUL — Violent protests in Afghanistan over the inadvertent burning of copies of the Quran by U.S. personnel left at least seven people dead and dozens injured Wednesday, laying bare the degree of anger against the West after more than a decade of war.

(PHOTO: Afghan protestors stand around a fire during a protest against Koran desecration in Kabul, Afghanistan, on February 22, 2012. Thousands of Afghan people staged a protest for the second day on Wednesday against the burning of copies of the Koran by NATO troops._

U.S. officials worked to contain the fallout from the incident, which came at a delicate juncture of the conflict, as the Obama administration seeks a political accommodation with the Taliban and attempts to seal a long-term accord with the Afghan administration governing the American presence here.

In demonstrations that spread to several locales across the country, hundreds of Afghans burned tires, threw stones and chanted “Death to America!” Foreign embassies and international organizations urged Westerners in the capital and elsewhere to keep a low profile.

The unrest erupted after Afghan laborers at the sprawling Bagram airfield spotted bags of Qurans among trash that was bound for the installation’s giant incinerator late Monday. They managed to prevent some of the copies from being burned, and showed the scorched remnants of others to people living near the base, prompting a groundswell of outrage.

On Tuesday, hours after the incident came to light, the top Western commander in Afghanistan, U.S. Marine Corps Gen. John Allen, apologized profusely and ordered immediate training for all Western troops on the proper handling of religious materials.

Nearly a year ago, another Quran-burning episode — this one deliberate, staged by a fundamentalist preacher in Florida — set off a violent reaction in the northern city of Mazar-e-Sharif. Seven foreign U.N. workers were killed when their compound was overrun.

Wednesday’s protests took place at several symbolic sites: outside a U.S. base on the eastern edge of Kabul known as Camp Phoenix, near the Afghan parliament building, along the main highway connecting the capital to the Pakistan border and in the province where the episode occurred.

The Interior Ministry said four of the deaths occurred in Parwan province, the site of the Bagram base. Deaths were also reported in Kabul, in the eastern city of Jalalabad and in Logar province, outside the capital. More than two dozen people were injured, some seriously, Afghan officials said.

The episode roiled already difficult relations between the U.S. military and the Afghan government. Afghan President Hamid Karzai has long chastised the NATO force for what he calls a persistent failure to respect Afghan cultural norms.

Even some Afghans who said they believed the action had been the result of error, not malice, found it difficult to accept Allen’s apology.

An investigation was quickly launched to determine, among other things, why the holy books, previously used by detainees at a large military prison adjoining the Bagram base, were being discarded. U.S. military officials speaking on condition of anonymity said prisoners were passing the Qurans and other religious texts back and forth with messages written in them.

In Wednesday’s clashes, some demonstrators wielded sticks and knives, while authorities used tear gas and in some instances live ammunition to subdue the crowds. But a 45-year-old protester named Badar said the affront was such that he had no choice but to take to the streets.

“Quran-burning is an illegal act,” he said. “And it is a desecration of our religion.”