Taking a stab at spear fishing 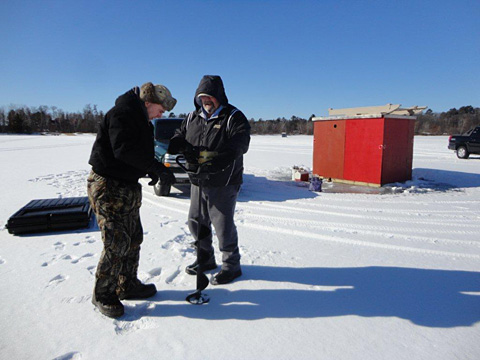 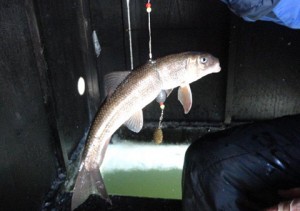 Do we stand out on a windswept lake with thousands of other crazy fishermen, or go spear-fishing inside a heated shack on a sparsely occupied lake 10 miles farther up north?

I wondered: Is that even legal – chucking a seven-pronged spear into the water to impale an unsuspecting northern pike or whitefish?

Sounded like something only Native Americans can do. But yes, it’s legit, and would be a lot more comfortable than our original plan of competing in the Brainerd Jaycees’ $150,000 Ice Fishing Extravaganza. It’s billed as the biggest ice fishing contest in the world, with the winner getting a new pickup truck. About 10,000 fishermen were expected, although the cold probably kept hundreds away.

Our party of four, including Derek Ward of Maple Grove, Minn., Geoff Gorvin of Baxter, Minn., and Greg Gorvin of Savage, Minn., drove to Rutger’s Bay on the south end of the Whitefish chain of lakes north of Brainerd.

It would be my first attempt at spear-fishing since poking at Mississippi River carp as a kid in St. Paul.

After driving by the tournament site and listening to the radio broadcast (including national anthem and countdown to the noon start), we pulled up to Geoff’s little red shack. 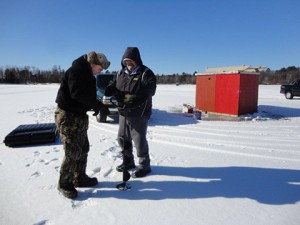 Derek and I used the power auger to drill holes while Geoff chipped a thin layer of ice off the top of the roughly 2.5-by-6-foot rectangle that had been sawn into the ice under the shack.

We’d be fishing in 7-foot-deep water, which was unusually green for this time of year, due to the warm, sunny winter.

Geoff put the harness around Chumly, as we called the decoy fish, and lowered him into the water. Then we plopped in the artificial lure — a bright little fellow intended to attract fish from afar.

The idea, Geoff explained, is to wait until a pike or whitefish comes by to stare down the decoy, then drop the spear onto it – with “it” being the game fish, not the decoy.

Then you pull up the spear using the rope tied to the top – and ideally you’ve got yourself a fish.

Derek worked the bright lure while I stood ready with the spear. Soon a nice big fish appeared. But wait? Was it a walleye, which would be illegal to spear? It didn’t matter. Derek bumped it with the lure and it darted away. Grrrr.

But soon another fish appeared – smaller, but definitely fair game. As in all ice-fishing excursions among longtime buddies, there are various humorous accounts of what happened.

Derek’s version went something like this: Spear-chucker Joe wound up and threw the spear into the water, missing the target badly and scaring away any other fish that might come by that day. What a hoser.

The more reasonable version – mine, of course — was: I calmly positioned the spear over the target and dropped it down, releasing it like a dart with a quick flick of the wrist. If I missed, it was obviously because Derek was yelling and laughing so loud the fish fled.

At any rate, a cloud of lake bottom and weeds blew up around the spot where the spear hit bottom. I quickly grabbed the rope and pulled it up, eager to pull off the first fish of the day.

But amid a great uproar, the spear came up empty except for a few weed strands.
“You …!” Derek laughed, greatly amused at my technique, or lack thereof. “You’re not supposed to throw the thing down there.”

“What? I barely missed him!” I alleged, laughing but a bit disappointed.

Then I noticed that poor Chumly had a little battle scar on his back due to the fracas.

Apparently I grazed him with my shot. After more razzing about hitting the decoy instead of the pike, I pulled on the harness line. Chumly wiggled his tail, seemingly no worse for the wear. He held out for the rest of the afternoon, anyway, but never did end up face to face with another fish.

Oh well. A few beverages, brats (with frozen sauerkraut) and a lot of laughs later, it didn’t matter a flyin’ fin.

Heck, it wasn’t like we were realin’ ‘em in from the portable shack we’d set up nearby.
Our take for the day: One small walleye that was too small to keep.
And a lake full of laughs.

To read more about the Extravaganza, visit the Brainerd Dispatch site at http://brainerddispatch.com/.