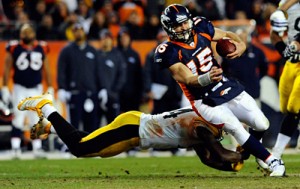 By Frank Schwab, The Gazette –

Denver, who finished the regular season at 8-8, on a three-game losing streak, beat Pittsburgh, which was 12-4 and the defending AFC champion, won, 29-23, in overtime at Sports Authority Field in an AFC wild-card game on Sunday night. Broncos receiver Demaryius Thomas took a pass from quarterback Tim Tebow on the first play of overtime 80 yards, stiff-arming cornerback Ike Taylor at about midfield and streaking down the sideline for the victory.

(PHOTO: Denver Broncos quarterback Tim Tebow is tackled by Pittsburgh Steelers inside linebacker Lawrence Timmons after running for a first down during the third quarter of their AFC wild-card game, Sunday, January 8, 2012 at Sports Authority Field at Mile High in Denver, Colorado. The Broncos won, 29-23.)

Denver will play at New England next week.

Denver and Pittsburgh traded field goals in the first 5:01 of the fourth quarter. Willis McGahee’s fumble was recovered by Pittsburgh, and Ben Roethlisberger threw a 31-yard touchdown to Jerricho Cotchery to tie the game.

The Broncos couldn’t get into field-goal range on their next drive, allowing the Steelers to get the ball back with a chance to win in regulation. But the Steelers’ drive stalled as the fourth quarter ended, and the game went to overtime.

The Steelers cut Denver’s lead in half in the third quarter, thanks in part to a quick whistle by the officials.

Pittsburgh appeared to throw a backwards pass, which was fumbled and recovered by Denver, but the officials whistled the play dead, thinking it was an incomplete pass. Instead of the Broncos having the ball deep in Steelers territory, Pittsburgh retained possession and marched downfield for a touchdown to cut Denver’s lead to 20-13 in a AFC Wild Card playoff.

The score came on a 1-yard touchdown run by receiver Mike Wallace on an end around. At the end of the quarter, the Broncos were on a drive inside the Steelers’ 20-yard line.

The second quarter, which has been a problem for the Broncos most of this season, was all Denver as it took a 20-6 lead against Pittsburgh.

The Broncos scored on a 30-yard touchdown pass by Tebow to Eddie Royal, then on an 8-yard touchdown run by Tebow later in the quarter. An interception by Broncos safety Quinton Carter set up a field goal by Matt Prater, and Prater got another field goal with 1:05 left in the first half.

Pittsburgh took a 6-0 lead in the first quarter as the Broncos’ offense managed just 10 yards on its first two drives.

The Steelers started with a score on their first drive. Tight end Heath Miller picked up a first down on a third-down catch, then Miller got open in the middle of the field for a 33-yard gain. The Steelers’ drive stalled, but Shaun Suisham hit a 45-yard field goal to give Pittsburgh a 3-0 lead.

Denver’s offense didn’t do much to impress in its first two drives. Tebow badly missed on a third-down pass on the Broncos’ first possession, and a punt followed. The next time Denver had the ball, tight end Dante Rosario had a potentially long pass play go off his hands incomplete, and then a third-down lateral and run was a yard short of the first down, which led to another punt.