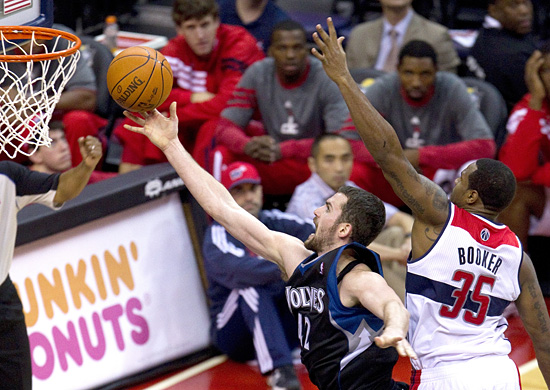 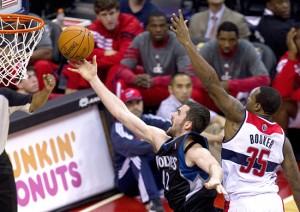 WASHINGTON — Those relative few who remained from a sparse Sunday matinee audience at Verizon Center booed when Minnesota Timberwolves guard Ricky Rubio celebrated Sunday’s 93-72 victory over the winless Wizards by hurling the ball high into the air.

Their displeasure was directed at the still-winless home team rather than the rookie’s long-standing victory tradition, although those with sharp memories might have booed Wizards management instead.

Two days before the 2009 draft, new Wolves boss David Kahn swung a deal with Washington, sending Mike Miller and Randy Foye to a Wizards team expecting to make a playoff push that next season for the draft’s No. 5 pick.

That pick became Rubio, and on Sunday he paired with fellow rookie Derrick Williams and completely changed the game’s complexion when they entered together late in the first quarter.

The Wolves trailed 17-13 when they subbed in for a starting lineup that moved Wes Johnson to small forward and inserted Wayne Ellington at shooting guard because Michael Beasley (sprained foot) was injured.

They led 48-34 when Rubio and Williams next left the floor at halftime.

For those keeping score at home, that was a game-changing 35-17 run in Rubio’s first game against Washington point guard John Wall, the 2010 draft’s No. 1 overall pick.

By the time the afternoon was over, Rubio and Williams had combined on another alley-oop, slam-dunk collaboration sure to appear on “SportsCenter.”

Both finished tied for a team-best plus-29 on the plus-minus ratings — if you believe in that statistic — and their play together made another 20-point, 16-rebound game by Kevin Love seem like something of an afterthought.

“We’ve developed a good chemistry together, since the first day of practice,” said Williams, who played his entire 30 minutes, 27 seconds Sunday beside Rubio. “I think he knew of me, but I don’t think he knew I could really jump. After the first lob we connected on in practice, I just told him, ‘Man, throw it up there, I’m going to catch it.’ I rarely missed alley-oops.

“He has a good basketball IQ. He’s going to find you.”

They combined Sunday for more than just another highlight-reel dunk: Williams stretched the Wizards’ defense by scoring 12 of his 14 points off the bench on four three-point shots.

Rubio assisted him on all four.

“Yeah, I forgot about those,” Williams said.

Rubio contributed 13 points, 14 assists and six rebounds, while Wall made three of 10 shots (two of those three were dunks) and had 10 points, six assists and five rebounds as a starter. Rubio’s 14 assists were his third double-digit assists total in eight NBA games and they helped the Wolves answer with their first road victory after disappointing losses to Memphis and Cleveland at home.

Afterward, Wolves coach Rick Adelman was asked when Rubio — who has started the season by playing every second of every fourth quarter — was going to be promoted to starter.

“I get real tired of answering that,” he said. “He’s doing just fine.”

Fine enough that one Verizon Center press room wag commented on how Rubio, at first glance, makes his teammates better while Wall doesn’t. The Wolves, by the way, have seven players on their roster who were top six lottery picks. The Wizards’ only other player chosen that high is last summer’s No. 6 pick, Jan Vesely.

“If it had been Rubio, who knows, John Wall might not have been here,” Washington coach Flip Saunders said, referring to that 2009 trade the Wizards hoped would bolster a team that already included Gilbert Arenas, Caron Butler and Antawn Jamison. “There were a lot of things that went into whole equation.”

Rubio said Sunday he is happy where he is.

“I don’t know, Minnesota was the team that drafted me and I don’t think anything else,” Rubio said. “They were the ones who trusted me and I’m so glad they did.”