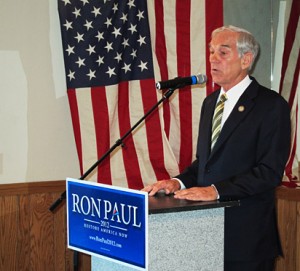 WASHINGTON — A solicitation from the 1990s that carried Texas Rep. Ron Paul’s name predicted a “coming race war,” suggested the government was engaged in a “cover-up” over AIDS, and warned that a plan to update U.S. currency was really a conspiracy to “steal our freedom and our prosperity.”

It is the latest controversial writing to resurface this week as the congressman’s record is coming under new scrutiny amid speculation that he may be gaining ground in Iowa, where the first GOP nominating contest of the 2012 presidential campaign will be held next month.

The letter — an appeal for supporters to subscribe to Paul’s newsletters — was obtained by Reuters from James Kirchick, a contributing editor for the New Republic magazine, who said he found the letter in archives maintained by the University of Kansas and the Wisconsin Historical Society.

Sent under the banner of “Congressman Ron Paul” and carrying Paul’s signature, the letter offers “wealth-saving intelligence” gleaned from Paul’s network of sources within the federal government. For $99, readers could receive monthly newsletters including the “Ron Paul Political Report,” an investor’s manual and the phone number for Paul’s financial hot line.

Written in the first person, the letter warned readers that President George H.W. Bush and the federal government had scammed Americans by updating U.S. currency to prevent counterfeiting and money laundering.

“The feds see us as rats in a maze,” the letter said. “And they want to own the maze. And the New Money is a key part of this scheme.”

Describing the new bills, which Paul  “uncovered” as a member of Congress,  the letter said:  “These totalitarian bills were tinted pink and blue and brown, and blighted with holograms, diffraction gratings, metal and plastic threads, and chemical alarms. It wasn’t money for a free people. It was a portable inquisition, a paper ‘third- degree,’ to allow the feds to keep track of American cash, and American citizens.”

The currency conspiracy theory reads like a paranoid version of Paul’s long-standing argument that U.S. monetary policy has set the country on the brink of collapse. But the letter is also riddled with provocative accusations that veer into territory that seems entirely unrelated.

“I’ve been told not to talk, but these stooges don’t scare me,” the letter said. “Threats or no threats, I’ve laid bare the coming race war in our big cities. The federal-homosexual cover-up on AIDS (my training as a physician helps me see through this one.)”

Paul has struggled to craft an explanation for offensive statements that were contained in his newsletters from the late 1980s and early 1990s.

“We are constantly told that it is evil to be afraid of black men, it is hardly irrational,” one newsletter said. Another, referring to the 1992 Los Angeles riots, said that “order was only restored in L.A. when it came time for the blacks to pick up their welfare checks.”

On Wednesday, Paul disavowed the statements, saying he had not written them, nor had he read them, at the time they were mailed out. But in the past, Paul had defended some of the writings, suggesting they were taken out of context.

Drew Ivers, the Iowa chairman for Paul’s campaign, told Reuters on Thursday that Paul stands by material he has written under his own signature. But when asked if that meant he still believed there was a federal cover-up relating to AIDS,  as the letter states, Ivers said: “I don’t think he embraces that.”

Now, Paul spokesman Jesse Benton tells Talking Points Memo that Ivers was not authorized to comment on the matter, and that Paul “did not write that mail piece and disavows it.”

“Drew Ivers is a great guy and leader, but he was not speaking on behalf of the campaign and is not acquainted enough with the issue to have the facts,” Benton said.