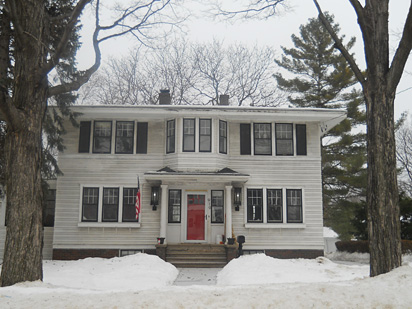 Buying and living in your dream home is supposed to be a wonderful experience, but that’s not how it turned out for Meggan Alexander and her husband, David.

Meggan Alexander says that after closing on their “dream home” at 919 N. Adams in Mason City (pictured right) the dream ended and the “true nightmare into which the lender and realtor had lured me” began.

Currently, both Meggan and David Alexander have been convicted of mortgage fraud and could face stiff jail terms: Meggan up 92 years and David 30 years, as well as fines. Sentencing will be at a later date in a Federal Court and both are free on bond.

Meggan Alexander contacted NorthIowaToday.com and asked to tell her side of the story. She says her nightmare home-buying expereince was less about fraud and more about a “predatory home loan” and “a fraudulent pest inspection that was arranged by the bank officer and the realtor. An FHA inspection that did not even identify the correct property components or conditions. A Bank of America lending officer who was getting paid by the number of loans that she completed, and who without my knowledge put fictitious information in my loan file so that she could close my loan and get paid. A realtor who refused to give me copies of papers that I signed.”

Within days of moving into their new home, Meggan says serious problems with the house were uncovered, despite previous inspections that had said otherwise.

First, the Alexanders discovered mold in their home. “The entire system of ceilings fell in because of hidden water problems, exposing toxic black mold that had been intentionally hidden. The mold was found to be throughout the house, and I was now told by a certified mold inspector that the home was not safe to live in,” Meggan told NorthIowaToday.com. She says the Cerro Gordo County Dept. of Public Health “found layers of dangerous asbestos in every furnace duct.”

The uncovered structural damage to the house was so severe, Alexander said, that “Several contractors told us that to fix the structural damage of our home it would need to be completely demolished and rebuilt, at a cost that would be at least as much as the entire purchase price of the home.”

Next, a serious insect issue was uncovered, despite being told by their bank and realtor that the home “had passed with flying colors,” according to Alexander. “The un-thinkable came crawling out of every wall we touched. Termites, Carpenter Ants, and Powder Post Beatles had been feasting on our home for so long that the entire structure was caving in. The damage done by this pest infestation was so bad that while we were living in the house, the hardwood floors upstairs buckled almost 8 inches in a two-day period.”

The problems with the home got so bad that the Alexanders moved out and rented an apartment. “We were also having some trouble making the mortgage payments, that’s true” Meggan Alexander also said. “We were told by lawyers and other real estate experts that we should abandon the mortgage due to the serious problems with the house, so we did. That’s when the bank looked at our papers and brought us to court on the fraud allegations.”

Once the case went to trial, NorthIowaToday.com is told that the “predatory loan” angle was not allowed into the courtroom proceedings by the Judge, Linda Reade. Alexander also claims that other important evidence was not admitted by Reade. NorthIowaToday.com was also told by Meggan Alexander’s mother-in-law, Nancy Alexander, that Reade is an investor in “the lending institution that brought this suit.”

Meggan is now “taking it one day at a time” until sentencing and spending time with her family until then.