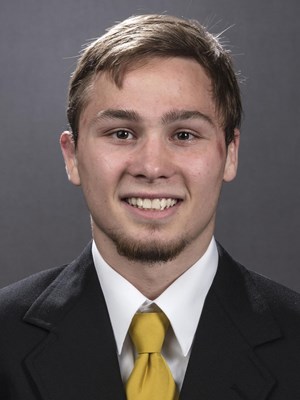 IOWA CITY – Three falls and a total of four bonus point wins propelled the second-ranked University of Iowa wrestling team to a 34-6 thrashing of No. 11 Nebraska on Friday night inside Carver-Hawkeye Arena.

IOWA CITY – Three falls and a total of four bonus point wins propelled the second-ranked University of Iowa wrestling team to a 34-6 thrashing of No. 11 Nebraska on Friday night inside Carver-Hawkeye Arena.

“This is the first time we had what we’re calling our full lineup – (Brody) Teske, (Real) Woods and Lee — and the other seven,” said Iowa head coach Tom Brands. “When you’re in tough situations, tough positions, you win those positions – that’s how you blow people out on the mat.”

Lee opened the dual with his fifth consecutive fall (sixth of the season), pinning No. 7 Liam Cronin in just 38 seconds. Lee took down Cronin in the opening seconds before settling in and locking up a cradle for a 38 second fall – his fastest of the season and tied for the third fastest of his Hawkeye career.

“I am trying to wrestle every match as hard as I can and I just happen to be getting pins,” said Lee. “In the past it has been tech falls or majors. My goal is to go out and have hard, smart take downs and turns and falls.

“I wrestle the next position and if things happen, you take what they give you and you try to get to the positions that favor you. If you end up in a position that you can pin a guy, then you have to put them away.”

The win moved Lee’s record to 9-0 this season (all bonus point wins – six falls, two majors, one tech) and it was Lee’s 47th straight victory dating back to the 2018-19 season. It is the ninth longest streak in Iowa wrestling history.

“We have to keep it going, he’s solid,” said Brands. “They are quick falls. That’s what we like, get on the mat, get off the mat. He’s a ferocious competitor and we love it.”

Iowa pushed its lead to 9-0 when junior Brody Teske downed Kyle Burwick, 5-2, at 133. Teske trailed 2-1 after the first period before taking the lead on a second period reversal. He pushed his lead to 5-2 with a third-period takedown to improve to 3-0 this season.

“I was finally able to get all the ducks in a row and wrestle in front of a sold-out crowd,” said Teske. “That is what I live for, and it was a lot of fun. I am improving, we’ll get better each and every day.”

In a top five match up at 141, No. 2 Real Woods earned his eighth victory of the season, downing No. 4 Brock Hardy, 6-4. Woods led 4-2 following a reversal and two-point near fall in the first period and made it 6-2 with a second period reversal. (Hardy notched a third-period takedown late to make the 6-4 final.)

The victory was Woods’ third ranked win this season and it was the highest ranked opponent he has defeated in his collegiate career. The loss was just Hardy’s third in 22 matches (19-3).

Murin notched the Hawkeyes’ second fall of the dual at 149, when he recorded a second period pin of Dayne Morton. Murin led 4-1 after the first before locking up a cradle off a takedown to complete his career-best fourth pin of the season.

Nebraska got on the board in the final match before intermission when top-ranked Peyton Robb downed No. 16 Cobe Siebrecht at 157, winning by a 7-2 decision. It was Siebrecht’s second loss (7-2) of the season.

The Hawkeyes notched their third bonus point victory of the dual coming out of intermission when Kennedy posted a major decision over Bubba Wilson at 165. The ninth-ranked Kennedy led 2-1 through one and 5-1 through two before notching three third-period takedowns to secure the major.

The Huskers won their second match of the dual at 174 when No. 3 Mikey Labriola edged No. 16 Nelson Brands, 3-2. Labriola had a third-period takedown that proved to be the difference. All three of Brands’ losses have been by two points or fewer.

In the final bout of the night, Cassioppi led 3-0 after one, 8-1 after two before blowing the match open in the third. He had two takedowns and a four-point near fall to make the score 16-2 before cutting Davison with 34 seconds remaining.

Cassioppi took down Husker heavyweight to his back and finished off the fall in 6:39 for his NCAA-leading 10th pin of the season. The Illinois native is now 15-0 this season with 10 falls, one major, one stall out and one forfeit victory. He is the first Hawkeye since 2017-18 to have 10 falls in a single season.

“Our job is to put on a show,” said Lee. “Cassioppi’s last match, that was awesome. You almost stall a guy out, then you tech him, and then you pin him. That’s how you put on a show. That’s good stuff, I was happy with how he wrestled.”

OF NOTE…
The Hawkeyes have won 14 consecutive duals dating back to the 2021-22 season.
Iowa has won 14 straight duals over Nebraska.
Spencer Lee’s fall was his 10th career pin in under one minute. He now has 27 career first-period falls. All six of his falls this season have come in the first period.
It is the second time in Lee’s career he has pinned five consecutive opponents (2018-19 season).

UP NEXT
The Hawkeyes return to action Sunday, traveling to Madison to face No. 16 Wisconsin. The dual will begin at 2 p.m. (CT) and be televised live on BTN.