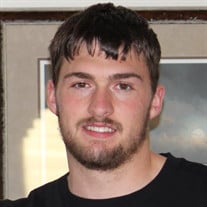 Branson’s family will greet relatives and friends beginning at 9:00 am until the time of his service at the church on Monday.

The eldest of two sons, Branson James was born December 1, 1993 to James and Becky (Josten) Bull. Branson was a lifelong resident of Mason City, born and raised. He grew up attending Mason City schools along with his best friend, Patrick.

Branson was always an active kid, which carried over into high school where he found his love for football. He played as a Guard for the Mason City Mohawks under the direction of Coach Justin Penner, who Branson always looked up to. Branson learned the value or hard work and dedication during this time, both of which stayed with him in the years to follow.

His love of football continued even after high school. Many Friday nights were spent with his dad, traveling across the state of Iowa to catch a game. He loved following the Western Dubuque Bobcats and attending their games whenever able.

He loved playing video games and taught his mom many different games for their weekly game night, something Branson always looked forward to.

Branson enjoyed staying active and loved working out and lifting. He’s worked out consistently since high school and lifted alongside his Dad for 13 years. He participated in CrossFit and won his only CrossFit competition and was a member of the River City Rugby Football Club for a couple of years. Most recently he had joined Grace Church’s softball league and enjoyed playing alongside his teammates. He had also joined a Journey Group at church which has been a highlight for Branson; he valued his new found friendships and looked forward to their group activities.

Branson will be remembered for his gentle heart, kindness, and tenacity. He was self-taught in speaking and writing Japanese due to his dedication and self-discipline, and always gave his best effort in every endeavor he encountered. Branson will be greatly missed by all who were fortunate enough to know him.

He is joined in Heaven by his beloved mother, Becky Bull; and grandfather, Calvin Josten.