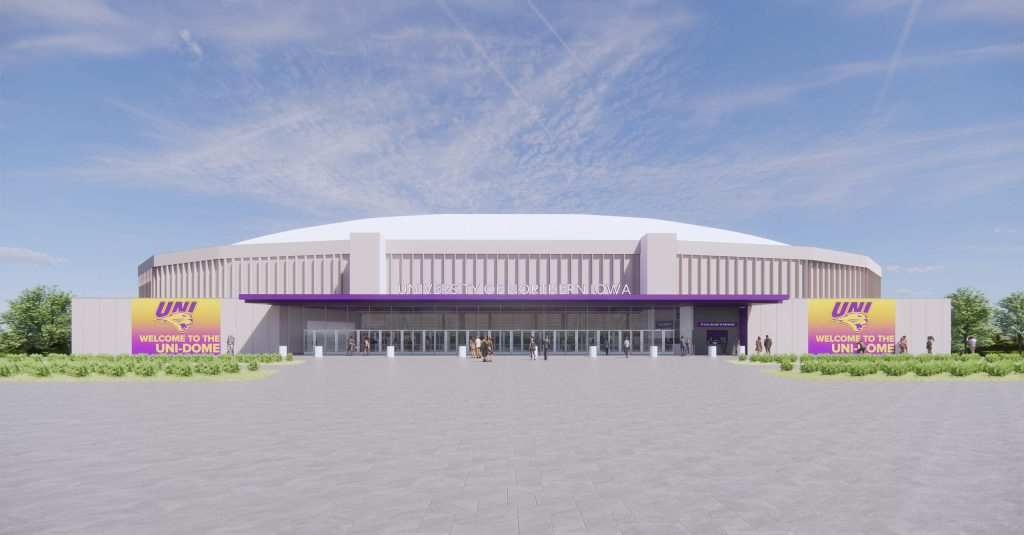 CEDAR FALLS - For nearly 50 years, one goal has defined Iowa prep football: make it to the Dome.

CEDAR FALLS – For nearly 50 years, one goal has defined Iowa prep football: make it to the Dome.

In honor of the partnership between the Iowa High School Athletic Association (IHSAA) and the University of Northern Iowa to host the annual high school playoff championships, the IHSAA has pledged an investment in the UNI-Dome renovation project to provide a next-generation facility for the future.

“We appreciate our relationship with UNI and the opportunity to host the semifinals and finals of our State Football Championship in the UNI-Dome,” said IHSAA Executive Director Tom Keating. “The ‘Road to the Dome’ has been part of our postseason for nearly 50 years and we are excited that the UNI-Dome renovation will enhance the player and fan experience for years to come. We are happy to be involved with the project.”

“For nearly a half-century, our partnership with the IHSAA has given high school student-athletes an unmatched opportunity to compete at the highest level in a first-class facility,” said UNI Director of Athletics David Harris. “The aura and the atmosphere of the UNI-Dome really elevates the stakes and provides an environment for students and their families to experience Iowa high school football history. We’re extremely grateful to the IHSAA for their long-standing partnership on this event and their commitment to the future of the UNI-Dome.”

Since 1976, the UNI-Dome has played host to the IHSAA football playoffs, drawing an average of 25,000-plus fans each year. Over a two-week period in November, 28 teams ranging from the Eight-player division to large Class 5A schools battled to be crowned a state high school football champion. The 2022 playoffs drew an estimated 52,000 fans.

The playoffs are one of the largest and most recognizable events held in the UNI-Dome, contributing to an estimated $17 million in economic impact generated by the facility annually.

“For many Iowa families, the IHSAA playoffs are their first opportunity to experience the great things we have to offer in the Cedar Valley and at the University of Northern Iowa,” Harris said. “This in turn benefits local businesses and the broader community.”

The IHSAA’s financial investment supports a three-phased $50 million renovation of the UNI, included in the first phase of renovations is replacing the UNI-Dome’s nearly 25-year-old fabric roof in the summer of 2023, reconstructing the west entrance and concourse, creating new and increased restrooms, and providing new and expanded suites.

Donations to the project are tax-deductible through the UNI Foundation and can be made as a multi-year pledge.

It was announced back in October that Marilyn Bohl, a 1962 UNI graduate (then known as the State College of Iowa), has invested $5 million in the UNI-Dome renovation project.